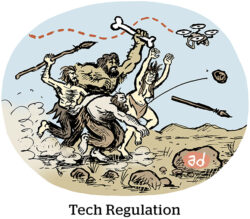 Feed The Hand That Bites You

Advertising insiders have become expert witnesses, so to speak, in antitrust battles with Big Tech.

There’s Tom Chavez, who co-founded and sold ad tech startups to Microsoft and Salesforce. He now operates a venture fund that invests in Big Tech competitors and lobbies against tech giants.

“I’m getting invited to fewer parties than I used to,” Chavez admits to Fast Company. “But I’ll also tell you that so many people are privately urging me on.”

Adam Heimlich, co-founder and CEO of Chalice Custom Algorithms, spoke before a Senate committee in 2020 regarding Google’s ad practices – a rare C-SPAN moment for programmatic as Senators probed header bidding. The Trade Desk is an investor in Chalice.

The news analytics tech CrowdTangle, which Facebook acquired in 2016, became a thorn in Facebook’s side because it showed how right-wing or incendiary stories typically had way more engagement than respectable news. CrowdTangle co-founder and former CEO Brandon Silverman, who led the group within Facebook, resigned last October and now consults on platform legislation.

The American Innovation and Choice Online Act would prohibit tech platforms from giving their own products and services an advantage. If passed, the law would have a big impact on Google, Amazon and Apple, which all own app stores, mobile devices and operating systems, as well as web browsers, streaming services and other platforms where owned-and-operated media or products compete against outside companies.

The Senate Judiciary Committee also marked up the Open App Markets Act, which targets companies that run app stores, CNBC reports. If passed, the law would prevent platforms from boosting their own products above a competitor’s in proprietary app stores or search engines.

Big Tech is lobbying hard against both bills – but so are other technology companies that often lobby against Big Tech. Vocal critics of Big Tech, including Yelp, Sonos and Tripadvisor, need web platform traffic but struggle to sustain current platform profit margins, and so they’re pushing back, too.

​​The White House has yet to weigh in, but representatives did meet with critics on Wednesday to hear anticompetition concerns.

If ad tech M&A were a drinking game, then … so much for dry January.

On Thursday, the video content management platform QuickFrame was acquired by MNTN for an undisclosed price.

MNTN, formerly SteelHouse, is a performance marketing company that now focuses on CTV. It sits at a weird intersection of TV branding and user-level targeting. Movie star Ryan Reynolds is an investor and MNTN’s chief creative officer. (How about that for weirdness?)

QuickFrame sits at the same intersection. It specializes in video production, often quick-to-make online or Stories posts, but it’s also got analytics for distribution across channels like Amazon Fire TV, Roku, TikTok and others. Even B2B is a CTV opportunity. QuickFrame creates The Trade Desk’s educational video content, among other B2B businesses on its client roster.

Companies like MNTN and QuickFrame realize that agency-style production shouldn’t be separate from campaign management. Content management tech needs to understand where and how to send videos at a moment’s notice – and creative production works best when informed by ad analytics.

What Instagram’s move into subscriptions means for TikTok – and for Patreon. [The Information]

Have advertisers like Unilever “lost the plot” over purpose? [Campaign]

What the metaverse has to do with Microsoft’s acquisition of Activision Blizzard. [WSJ]