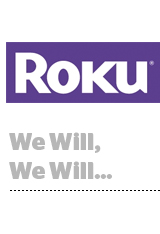 Roku shares jumped more than 50% after reporting strong revenue growth in its first public earnings report on Wednesday. The streaming video service’s hardware sales, consisting of its namesake connected TV-box devices, grew 3.8% to $67.3 million. Roku’s software revenue, encompassing its advertising and subscription revenue [AdExchanger coverage], more than doubled to $57.5 million. Hardware sales may decline as a percentage of revenue as Roku cuts prices to “to lure customers onto its platform, where it generates higher-margin ad sales and revenue-sharing fees,” writes The Wall Street Journal. More.

China In The Feed

Facebook may not be allowed in China, but the Chinese government is using Facebook to reach the world. Government-owned broadcast stations China Central Television and Xinhua spend hundreds of thousands of dollars on Facebook ads to promote propaganda to English-speaking audiences, The New York Times reports. Facebook says China didn’t use the platform to interfere in the US presidential elections. Rather, the government and private Chinese companies spend huge sums to promote their narratives in different nations. More.

Google has been pruning its Chrome browser of advertising products that reduce its user appeal. This year, the browser has banned autoplay video and incorporated the ad format standards created by the Coalition for Better Ads. And on Wednesday, a blog post announced that Chrome’s new releases will include features to block site redirects – when an anticipated site doesn’t load, but forces a user to another landing page. One out of every five feedback reports for desktop users comes from unwanted redirects. And while some are deliberate attempts to force a person to see an ad or pick up a cookie, often the site operator doesn’t know third-party code is rerouting visitors, writes Chrome product manager Ryan Schoen. More at The Verge.

For Snapchat’s open auction inventory, CPMs hover between $3 and $8, anonymous ad buyers tell Digiday. That’s in line with Facebook CPMs – except at Facebook’s scale, those prices generate more than enough returns, obviously. “Back in 2015, Snapchat asked brands for $750,000 a day for its disappearing ads. Those days appear to be over.” More. Related in AdExchanger: In blaming programmatic for its CPM declines, Snap appears to be resorting to an old publisher script – one that went out of fashion sometime ago. Read that.