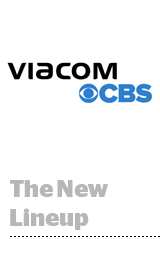 CBS and Viacom are (finally) back together, and that will create lots of opportunity for advertisers.

On Tuesday, after years of will-they-won’t-they corporate turmoil, the entertainment behemoths agreed to merge in an all-stock deal that values the combined company at around $30 billion, with $28 billion in annual revenue.

The new entity will be called – wait for it – ViacomCBS. It combines a portfolio of top-shelf content from CBS, Showtime, Nickelodeon, MTV, BET, Comedy Central and Paramount Network with a library of more than 140,000 TV episodes and 3,600 film titles.

The US Securities and Exchange Commission must still bless the deal, but there aren’t any obvious roadblocks to approval.

“CBS and Viacom will have the largest reach of any media company in the country,” Joe Ianniello, now permanent CEO and chairman of CBS, told investors during a conference call late Tuesday. “And when you combine that reach with our targeting capabilities and advanced advertising, the opportunity we’ll have together will be far greater than we would have from either company alone.”

Both Viacom and CBS come with advanced advertising and marketing solutions, including CBS Interactive, Viacom Vantage, which is a data-driven ad platform, and Viacom Velocity, a marketing and creative content team that sits within Viacom’s music and entertainment groups.

ViacomCBS has DTC streaming ambitions too, of course, but it’s also super-hot on ad-supported content and becoming “a first thought for advertisers and their agencies,” said Bob Bakish, Viacom’s former CEO, who will take the reins as president and CEO of the new entity.

In addition to the critical mass of Viacom and CBS under one roof, ViacomCBS won’t be shy with its checkbook to produce more content. Together, CBS and Viacom spent more than $13 billion on content in the last 12 months, and they’ve got 750 series either already ordered or in production.

That’s the sort of scale and beaucoup inventory that gets advertisers excited, particularly as everyone and their mother is gearing up to launch an ad-free subscription streaming service.

Although Viacom/CBS will obviously keep enough exclusive content to fuel its own streaming offerings, it’s also planning to license content from its library to third-party platforms globally, serving everyone from MVDPs, such as Comcast and Charter, and broadcast and cable networks like Fox and TBS, to Facebook Watch and other streaming platforms, including Netflix and Disney+.

“[We’re] using our free, ad-supported content offering as a powerful traffic funnel and consumer entry point to upsell from, as well as a place to continue to catch and get value from consumers taking a pause from a subscription platform,” Bakish said.

The Viacom/CBS merger reunites their respective assets for the first time since 2005, when media magnate Sumner Redstone, now 96, split them asunder after first bringing them together in 2000.

The elder Redstone’s daughter, Shari, who’s been steadfastly pushing for this deal for the last four years, will become chairman of ViacomCBS.