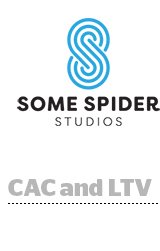 When the founder of Diapers.com launched a media startup led by parenting brands Scary Mommy and The Dad, he brought his customer-focused metrics with him: customer acquisition cost (CAC) and lifetime value (LTV).

And just like when Bharara ran Diapers.com, Some Spider Studios serves a large but specialized target audience. The media holding company started with moms, acquiring Scary Mommy in 2015. Last year, after seeing a gap in the market, it created The Dad, a realistic, humorous take on #dadlife.

Unlike Parents magazine or BabyCenter, which Bharara describes as focused on new moms with kids under 3, his sites aim to reach parents with kids of all ages. Thirty-five million moms and 35 million dads have kids under 18.

“With Diapers.com, we wanted to deliver an experience for our members that was better than what they could get anywhere else, and that would be an anchor for a long-term relationship with us,” Bharara said. “With Some Spider, I didn’t want to start with retail again, so I decided to take this idea of specialization and cultivate from the ground up a loyal, engaged, passionate audience using incredible content as its foundation.”

As the focus on engaged, passionate audiences – and LTV – suggests, Some Spider Studios isn’t chasing eyeballs and throwing display banners up alongside articles. Bharara envisions a diversified media brand.

Scary Mommy, for example, receives the bulk of its revenue from sponsored content with brands such as Target, Kroger and Unilever. It also runs programmatic ads and just launched a commerce shop with clever T-shirts, totes and cards.

Still to come: “Community, club and services” offerings that will emulate an Amazon Prime-like experience for its most engaged readers, according to Some Spider Studios’ President, Paul Smurl.

Success in advertising, commerce and new offerings around community all depend on maintaining engagement and making inroads with new audiences: LTV and CAC.

Like a marketer, Some Spider Studios measures CAC and LTV for every piece of content and channel, a granularity that helps it make more precise decisions.

Facebook tends to come out on top for channel performance, even after the platform pared down how much algorithmic love it gives publishers.

If a mom or dad likes a piece of content, there’s a good chance that they’ll be friends with other moms and dads who share their sensibilities, Smurl explained.

The same “flywheel” doesn’t exist for news: “You can quickly build a large audience [on Facebook] if it’s identity-focused in nature,” Smurl said.

Scary Mommy’s follower base (which includes Facebook) has grown from 750,000 to over 10 million in the past three years. The Dad grew from zero to 4 million fans and followers in 9 months.

Although it’s amassed a huge follower base, across all channels – including Facebook – Some Spider Studios prizes engagement, not reach.

“Interactions per piece of content is our guiding light, our talisman,” Smurl said. “It’s how we measure the success of everything we do.”

The flip side of that engagement focus is better results for advertisers. When Scary Mommy created a Kroger video about two moms playing hooky while they’re supposed to be grocery shopping, for example, it received almost 5,000 comments, with many people @-tagging their friends. That type of connection is particularly valued by Facebook, according to CRO Sharon Mussalli, who joined Some Spider Studios from Facebook.

“To be technical, our ad relevance score for every piece of content is incredibly high because of the type of content we create and because it’s created for moms and by moms,” Mussalli said.

Scary Mommy’s success engaging readers also boosts its own business performance. When Some Spider Studios acquired Scary Mommy three years ago, it brought in less than $1 million in revenue. After over 100% growth year over year for the past four years, revenue has grown to over $20 million, all by building a media brand using CAC and LTV.

“When you specialize in a large group and combine massive reach with user passion, you can build powerful identity brands, Bharara said, “That confers extraordinary marketing and economic advantages.”