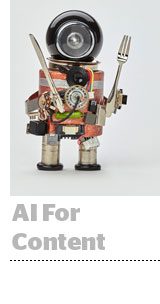 Food brands that want their ad creative to appear next to recipes for quick and easy dinners, Japanese food or gluten-free meals can buy inventory via CafeMedia’s private marketplaces that fits into those content categories.

CafeMedia didn’t want to make everyone switch to a new tech platform, and it would take an impossible amount of manual labor to tag and categorize 500,000 recipes. AI provided an automated solution.

In February, CafeMedia bought a subscription to IBM Watson, which focuses on natural language processing, and set up a database with Amazon Athena. Next, the publisher’s four-person data science team created a training set for Watson. CafeMedia found 30,000 recipes that were already correctly categorized because they had been coded using XML. Watson learned from there to categorize the remaining 470,000 recipes.

Four months later, the first private marketplaces and direct deals are in motion that take advantage of Watson’s AI to target the media. CafeMedia dubs the platform Marmalade.

“Most of the ad tech around content categorization is at a high level,” said Paul Bannister, EVP of strategy at CafeMedia. “Publishers can do a much better job than tech companies or advertisers with content categorization, because they know their content better than anybody and can dive down on a much deeper level.”

An orange juice brand, for example, can use Marmalade to target breakfast recipes. Or an advertiser can use the platform to place its ads next to recipes that use sour cream. Finally, CafeMedia can target event-related cuisines, such as Fourth of July grilling.

CafeMedia knows that contextual relevance drives big results because it’s done the work manually before. For example, it recently used valuable employee time to tag hundreds of articles about repainting rooms for a paint company. Because those pages generally reach people looking for information about painting a room, the campaign has performed extremely well.

Watson has been able to successfully group together like ingredients such as onions, for example, after recognizing that red, white and yellow onions are used similarly as ingredients, but spring onions and scallions fall into another category.

Watson learned where to find an article on a page while avoiding getting confused by “related recipes.” Watson also learned how to turn “best whole-wheat flour you can find” into “whole-wheat flour” for categorization purposes.

Occasionally, Watson makes a misstep. For “medium head of cauliflower,” it originally thought “head” was the ingredient rather than cauliflower, but the AI becomes more accurate over time.

Natural language processing offers a big improvement over basic contextual targeting done by many tech companies, Bannister said. For example, without AI, targeting to pages with “Valentine’s Day” would include pages where the blogger had linked to related articles that mentioned the phrase, rather than only articles focused on Valentine’s Day.

Once Watson masters CafeMedia’s food sites, the publisher will turn its abilities to its home sites.

“Home is more complex, but it’s particularly interesting because it means different things,” Bannister said. “Some of it is seasonal decorating, some of it’s renovation and other content is crafting.”

Being able to parse those details for advertisers, like the paint company that wants to focus on painting articles, will make a big difference.

CafeMedia will lastly tackle its parenting websites, which have the least defined content. And in the future, it will be able to create content areas that are popular with advertisers and cut across food, home and parenting genres, such as “back to school.”

In the coming months, CafeMedia plans to demonstrate the kind of results its contextual targeting can create for advertisers.

“I think advertiser performance is going to be astronomically good,” Bannister predicted. “We want to give our beta partners a small package, have them test it out, and we want to blow them away.”