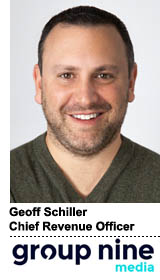 G9 Direct lets DTCs tap into Group Nine’s first-party data trove. Those clients can design their own ad creative or let the publisher’s branded content studio Brandshop design it. They can then send the ads to consumers via Group Nine’s Instagram and Facebook accounts.

“We can open up new relationships with DTC brands who are on the way to being full-funnel marketers, but who, in the early days, tend to be very focused on that short-term ROI,” said Group Nine CEO Ben Lerer at Programmatic.IO. “It’s a way to expand the pool of marketers we work with, and to expand the partnership with Facebook and YouTube and Snapchat and those guys.”


Schiller speculated that this boost is driven by the brand’s ability to capitalize on the trust between publishers and their audiences.

To build G9 Direct’s functionality, Group Nine first had to understand its data in a new way.

“We did analysis through audience research to understand which segments drive behavior X, Y and Z, and really isolate bottom-of-the funnel behavior,” Schiller said. “The playbook we’ve developed in terms of brand love and brand engagement is being applied now to direct response.”

In terms of metrics, Group Nine plans to optimize and hit target CPAs (cost per action) and provide analysis on different segments via A/B testing: “All the things we’d do in our day-to-day top- and middle-of-the-funnel world,” Schiller said.

He said Group Nine could also provide measurements if clients want different outcomes such as email sign-ups, though he anticipates most goals would relate to hitting CPA targets.

Group Nine views G9 Direct as the latest of its solutions to accommodate advertisers’ needs and access the “untapped trove” of direct response dollars.

While Schiller said there were no specific benchmarks to evaluate its success over the next year, he hopes to see repeated ability to drive consistent results for advertisers.

“We want to develop a roster of clients that keep coming back,” he said. “If the burn rate of these clients is super high, then it does us no good. As we’re growing the number of DTC and DR clients, we don’t want to constantly be replacing them. As we’re doing this roll-out, who are we able to retain month over month, campaign to campaign, and how quickly were we able to scale?”