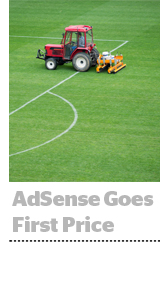 The change will go into effect later this year, Google shared in a blog post on Thursday.

Google Ad Manager and AdMob have already switched to a first-price auction.

Though not nearly as momentous as when Google flipped the switch for Ad Manager, the AdSense change signals that momentum behind the move to first-price auctions has not ebbed.

While most of the ecosystem has already shifted to a first-price auction, AdSense was a holdout.

An antitrust lawsuit led by Texas and other state attorneys general against Google makes allegations of illegal monopolization centered on the Google Display Network – which includes AdSense for Content – and Google Ads, which bids into AdSense.

In light of the suit, eliminating a contentious practice makes good business sense for Google.

Compared to a second-price auction, first-price auctions are simpler for buyers and more transparent. You bid $7, you pay $7, end of story.

In second-price auctions, the spread between an advertiser’s bid (the same $7) and the second price (maybe just $2) leaves potentially large margins in between. In our hypothetical example, that would be $5 up for grabs if an exchange wanted to game the auction.

Tech companies would often pocket some of that spread, sometimes benignly referring to the margins as “buy-side fees.” Similarly, exchanges could use a “discount” they received on one bid to subsidize another auction, thereby boosting the exchange’s overall win rate.

The fuss that kicked up around the so-called “ad tech tax” likely wouldn’t have reached such a boiling point without the second-price auction model and its murky fee structure.

Google in particular set up its second-price auctions in a way that advantaged itself. Because Google controls both an exchange and the dominant ad server, it did not bid blindly into the auction, but rather gave itself “last look” and an opportunity to best the other bids.

Because of this practice, win rates through Google’s exchange were widely believed to be higher than outside exchanges.

In its blog post, Google says moving AdSense to a first-price auction should have a neutral effect on publishers.

The change will “grow advertiser spending confidence in digital advertising,” said Google product manager Matt Wong, a nod to how the lack of transparency in second-price auctions made advertisers skittish about where their programmatic dollars were going.

Theoretically, the move should benefit outside DSPs that bid into AdSense by putting the auction on a more level playing field.

But the industry is a little dubious.

Because the move excludes AdSense for Search, Google’s dominant and exclusive product, “What difference does it make?” said a media executive who requested anonymity to speak out against Google. “I suppose this is Google making room for more advanced bidding and monetization opportunities in their black box.”

That skepticism comes from Google’s history of making changes ostensibly to increase transparency but with hidden advantages for itself that were discovered only later. For example, one of the allegations in the lawsuit brought by the state AGs is that when Google removed its last look advantage in 2017, it “reengineered the ability to trade ahead of rivals” through a “bid optimization scheme based on predictive modeling.”

In other words, a black-box machination in order to keep its edge.

The media executive also noted that AdSense continues to offer a treasure trove of data that Google uses across all of its ad products – something Google itself publicly mentioned recently when talking about its move to big data-fueled AI attribution modeling.

So, what to make of AdSense switching to a first-price auction?

Depending on your view of Google, the change either continues its slow move toward transparency and equality or it’s part of a larger rearchitecting that will ultimately keep Google on top.