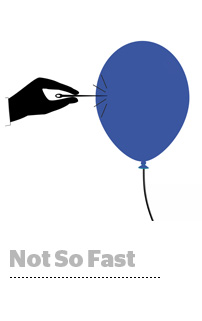 Facebook CFO David Wehner recently told investors that even if the economy falters, Facebook’s ability to measure advertising returns is its saving grace.

Will the same hold true for small- to mid-sized marketers? AdExchanger called on several analysts and senior marketers to get their take. On the whole, they agreed SMBs will continue to buy ads during an economic rough patch, but there are a couple of important caveats.

“When times are lean, advertisers look for the most measurable media, so you might actually see an increase in spend on something like digital, especially among small businesses,” said Dan Salmon, managing director of media and technology equity research at BMO Capital Markets.

Facebook doesn’t share breakdowns of its advertisers by size or by the percentage of revenue they contribute by type, but Sheryl Sandberg did mention during a 2017 earnings call that more than 4 million small businesses advertise on Facebook.

In 2017, Facebook had 5 million advertisers overall. As of Q1 2019, the total advertiser count on Facebook is up to 7 million. If every SMB on Facebook spent just $200 a month on Facebook ads, the annual total would almost certainly surpass $12 billion.

But Brian Wieser, a former Pivotal Research analyst, is less sanguine about Facebook’s prospects during a recession.

Facebook, and Google, too, for that matter, are both susceptible to a macroeconomic decline because of their heightened exposure to SMBs, Wieser pointed out in a January research note, when he still worked at Pivotal. (He recently joined GroupM as global president of business intelligence.)

If it starts to get cold out there and an SMB needs to make payroll or choose between paying vendors and buying ads on Facebook, guess which expense is going to get the axe.

“Some smaller businesses only ever spend money on advertising on a very discretionary basis, because they think they should,” he said. “Imagine if half of these advertisers cut 5% of spending, 40% cut by 50% and then 10% go out of business in a recession – that would be disastrous, but not unrealistic.”

Although it’s difficult to say, since Facebook doesn’t provide info on this, Wieser estimates that SMBs could make up around 35% of Facebook’s revenue.

“If small businesses act the same way during the next recession as they did during the last, they’ll cut aggressively,” he said. “And my guess is that SMBs account for a disproportionate share of Facebook’s growth.”

Other side of the coin

Since the Great Recession, SMBs have had an additional 10 years to experiment with digital advertising, said Elgin Thompson, managing director at Digital Capital Advisors, and digital spend may no longer feel all that discretionary.

SMBs also don’t have a lot of scalable marketing options, Thompson said, since they can’t go publisher direct with sales teams and don’t have enough budget to attract RTB exchanges.

“Logic would suggest in a challenged market that Facebook and Google would find palatable solutions to retain struggling SMB customers for what they care most about – their bottom line,” he said.

Not only do SMBs often not have the resources to seek alternative marketing channels – especially during times of financial strife – they’re also drawn to the ease of self-serve that something like Facebook’s Ads Manager or Google Ads (formerly AdWords) provides, BMO’s Salmon said.

Google, like Facebook, has numerous SMB advertisers, and it was fine during the 2008 financial crisis. Although the traditional ad space saw revenue declines, Google actually grew during the last recession, Salmon said, albeit at a slower rate.

Erring on the side of caution

There isn’t historical information for how Facebook fared in 2008 and 2009 – the company didn’t go public until 2012 and wasn’t yet a meaningful player in the advertising market. But there’s no reason to think advertisers won’t keep spending on Facebook as long as they can prove a return. It’s the same reason ad spend didn’t stop flowing after the Cambridge Analytica revelations last year uncorked a seemingly endless flow of excoriating headlines.

“To make a serious impact, SMBs would have to find that either their audience isn’t on Facebook or that their audience doesn’t have drive to spend money that would justify the ad spend,” said Tirena Dingeldein, a content manager and strategist at Gartner Digital Markets and research manager for Capterra.

Jeremy Cornfeldt, president of Dentsu agency iProspect, agreed advertisers are going to get a lot more careful with their spend.

“Clients will absolutely put everything under the microscope, especially if they’re managing less in the way of cash flow, and they’ll likely increase their performance requirements – but, that said, they’re not just going to turn something off if it’s giving them what they need,” Cornfeldt said.

And Facebook, despite roiling with controversies, appears to still be giving advertisers what they need.

“Facebook has scale, advanced advertising opportunities and it performs,” Cornfeldt said. “Those three things put it in a pretty strong position, even in a recession.”