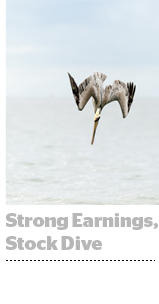 The Trade Desk beat its own expectations for Q1, but Wall Street wasn’t pleased.

The stock is currently tumbling, down more than 25% in the hours after the earnings call.

The Trade Desk reported revenue of $219.8 million and adjusted EBITDA of $70.5 million, which is 32% of revenue. The company said its adjusted EBITDA was a record, both on an absolute basis and as a percentage of revenue. CTV revenue doubled year over year.

The Trade Desk warned investors that in the year ahead it will face tougher comparisons, especially against its very strong Q4. And, beyond The Trade Desk, tech stocks overall have been on a downswing following many months of exuberance.

Wall Street also still appears confused by the UID2.0 initiative, despite explanations during the call and the Q&A with investors afterwards. No, it’s not a single sign-on, CEO Jeff Green told investors. Yes, The Trade Desk and UID2’s supporters will make sure their approach conforms to the spirit and letter of data and privacy laws.

Analysts also seemed uncertain about whether UID2.0 needs strong adoption among consumers in order to be effective.

Then there’s Google. Investors are still stuck on Google’s March blog posts clarifying its position on identity and seemingly throwing the UID2.0 effort under the bus.

But in Green’s view, “those blogs galvanized an entire industry to a new approach.” Green also took the opportunity to snipe at Google about its position.

Although Google plans to use its own login data for targeted ads, “they have been critical of others doing something very similar,” Green said – a reference to UID 2.0, no doubt.

The Trade Desk also emphasized its focus on CTV, noting  the company will have to push the market forward to make it more programmatic.

“In order to get the upfront market to evolve, you have to layer data on top of it,” Green said. “We think there is no way to do that at any scale without us being actively involved.”

And while CTV is cookieless, “a privacy-safe identifier for CTV will be a major factor” in allowing marketers to manage reach, frequency and relevance in the future, he said.

As a case in point, The Trade Desk developed a double-encrypted version of UID for broadcasters. Only a buyer with a special decryption key is able to read the ID. The controls “could prevent a company in the middle, even an ad-serving walled garden, from taking data or insight” from of the passing of IDs, Green said.

The feature also indicates how UID 2.0 can evolve in line with privacy needs – instead of becoming obsolete or driven out of existence, like third-party cookies are about to be.

Later this year, The Trade Desk will release its biggest platform refresh ever.

Dubbed Solimar, the platform will ask a marketer’s goals earlier on in the campaign setup process so that the DSP can better optimize toward those KPIs. The user interface will also be simpler.

The Trade Desk’s customer retention stands at 95%. The company expects revenue of between $259 million to $262 million next quarter and an adjusted EBITDA of $84 million. That revenue would be an 86% increase from Q2 2020 – when ad spend plummeted due to the pandemic – but apparently less growth than Wall Street would like.