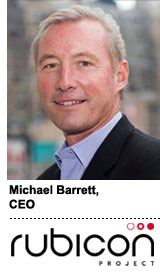 One year ago, Rubicon Project removed buyer fees from its platform, halving its take rate to 12.8%. The gutsy move occurred during a battle over take rates: Competitor AppNexus said its take rate stood at 8.5%, and its CEO called for a price war.

Drastically cutting take rates forced Rubicon to use cash reserves to fund the business. Before running out of cash, Rubicon promised investors it would grow inventory, attract more ad spend and get to a positive adjusted EBITDA by Q4 2018.

Rubicon Project has been rebuilding and adapting its business to a rapidly changing marketplace.

Its competitors changed: AT&T acquired rival AppNexus. Index Exchange ran into trouble with buyers because it wasn’t transparent about its use of bid caching and how its wrapper operated.

And as marketers scrutinized exchanges, supply-path optimization (SPO) intensified. The practice, where buyers eliminate some exchanges and prioritize others, may spur consolidation and help Rubicon Project – if buyers choose the exchange, and don’t turn it off.

Barrett spoke to AdExchanger about leading the company through change and back to growth.

AdExchanger: What does it take for one of the top five or six exchanges to go away?

MICHAEL BARRETT: There are 1,300 buyers on our platform, which makes it seem like the business is distributed. But there are four agency holding companies. If one decides not to buy from you, that leaves a mark.

You are going to see agencies say, “Our marketers have spoken. They want safety, low cost. No more letting my traders pick whatever [exchange] they want.” They will come with an approved list. It’s inconceivable that we exit 2019 without that happening.

Where do you see supply-path optimization happening already?

Talk to any agency holding company and ask them how many platforms they think they will be buying from in the future. The answer will never be more than 10 now, and for some it’s less than five. There is not going to be a lot of value driven by plugging into more than that many platforms.

The Trade Desk used to tout publicly how many platforms they were plugged into. Their number crested at 100. I don’t think they cite it now, but it’s closer to 40. The bigger [exchanges] are jockeying for position, but not all of the big ones you know now will exist. The flight to quality and safety will be the biggest collapsing factor of all.

Where does supply-path optimization help you? Where does it hurt your business?

Not in our favor would be someone who owns a DSP and a platform, and their idea of SPO is that their inventory is better and performs great, and the spend from that DSP is never put into competition. That’s where it doesn’t work for us – I’m not saying it doesn’t work for marketers.

You’re referring to how AppNexus did SPO.

Fair enough. You said it. Where it does work is when a marketer gives a dollar to their DSP and asks Rubicon to tell them how much we take on its way to the publisher. We believe our take rate is the lowest, and therefore it’s to our advantage to expose all the hops along the line, where $1 turns into 30 cents. That’s where SPO favors us.

What does AppNexus becoming part of AT&T mean for Rubicon?

They have a clear vision of what they want to do. It’s not what they are doing today, but in their defense it doesn’t exist today. They want to get all the premium video onto one platform. On the edges, there could be near-term opportunities since that’s their focus going forward.

Them moving off the Ad ID Consortium was disappointing. They are pretty much signaling that AT&T and their data becomes another closed, walled garden. It doesn’t help the openness of the rest of the web. We’ve got to get off cookies. We’ve got to move server-side and stop glomming up the page. I don’t care whose initiative it is, but we need to move forward, and a big player backing out isn’t helpful for the whole industry.

Rubicon said on its recent earnings call that it’s moving into tools and services to help publishers with header bidding. Why?

Header bidding is reaching an inflection point. The biggest enterprise publishers want to take more control. If I want a $2 bid to beat a $3 bid, because I have a relationship with that advertiser, I want to be in control of that choice. Some publishers don’t have all the resources to do that on their own but still want a bigger say in how their auction is conducted.

Does the wrapper become a SaaS product?

There is a school of thought within the company that [the wrapper] is going to be the business, and publishers will pay an ad serving or SaaS fee. I think that publishers aren’t going to want to write another check. The connection of demand with software is going to be with us for a while.

Rubicon is on track to deliver on its promise to investors to be adjusted EBITDA-positive in Q4 and cash-flow positive next year. What does that mean to investors? Are they looking for Rubicon to be acquired now?

We are considered a value company by investors. They look at cash on hand, where it used to be valued, and notice the delta. They tend to be relatively patient and supportive. We have people that have come into the stock that say they are here for an extended period of time and believe in the team, the story and the total addressable market, which is growing 15% to 20% a year. Even though they say they may not understand ad tech, they are comfortable there is money to be made.

Yes. 100%. There is a band of value investors and growth investors and not much overlap between them. By and large, our shareholder base has turned, which is to be expected when you’ve had a ride like this company has had.

Rubicon developed Estimated Market Rate (EMR) to help buyers in first-price auctions. It feels like a repurposed soft-floor product. How did it come about?

It works in a very similar fashion, so it’s not a bad analogy. Dynamic [soft] floors were based on looking at the value of inventory, knowing it typically trades around X, so we’ll put [the floor] at X. EMR is knowing that the impression cleared at $3 last time, so if you put in $3.10 you’re sure to win it. Its optimization is between savings and win rate, because no DSP wants to spend 90% less but win 10% of what they used to win.

Your take rates are going up (slightly). How are you getting people to pay more?

Our idea is to be the low-cost guy in market. We just had to walk it up a bit, and we’re in range now.

When you increase a publisher’s fees, do they get anything in return?

You kind of know when you’re getting a deal. And publishers want healthy competition. We’ve been clear that the buy-side fees were subsidizing the seller fees, and we’re trying to bring them in line with the market.

Where is Rubicon going to be this time next year?

The turnaround story will be completed. More change happened in the past 18-24 months in the business than in the past five years. That velocity continues.

The big theme in 2019 will be marketer involvement. Not too long ago, our only exposure to the buy side was DSPs. Then it was the DSP and the agency. Now it’s DSPs, agencies and marketers. Marketers will drive greater transparency because they have the wallet. This time next year, we’ll talk about a dozen marketers getting data direct [from exchanges] and honing strategies based on ad tech fees involved.