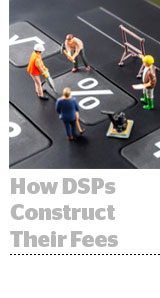 Demand-side platforms (DSPs) make money by taking a percentage of the media buys that flow through their technology – and from lots of other hidden extras they charge for.

Interviews with more than a dozen sources reveal that even as marketers make progress in understanding what they’re paying for, nontransparent fees abound in the DSP space.

Some of the fee practices, detailed below, should raise alarm bells for marketers. Others may be considered reasonable business practices. What they have in common: All have resulted from DSPs efforts to find new sources of revenue in a market with rising infrastructure costs and relentless pressure to innovate.

AdExchanger has identified four ways DSPs make money beyond the percentage of media – and has learned what the industry thinks of these deals.

Header bidding has multiplied the inventory that exchanges surface, creating added cost for DSPs. DSPs, in turn, want others to absorb that cost, namely exchanges.

Some DSPs have threatened to cap the queries per second (QPS) they allocate to an exchange, citing high costs. If an exchange wants the DSP to look at more inventory, the DSP expects a rebate to help it cover costs.

Exchanges sometimes accept these deals as a cost of doing business or even proactively offer them to DSPs to grow spend on their platform. Others reject pay-for-play deals – and resent seeing the exchanges that accept these deals benefit.

Sometimes these deals are couched as “supply-path optimization.” Exchanges might have a choice: Get better at how they filter inventory to accommodate the lowered QPS, or pay up.

Many buyers recoiled when told of QPS rebates. They want to buy where they get the best-performing inventory, not where the DSP gets a hidden kickback. Marketers don’t get the scale and reach they’re paying for when DSPs strike these deals.

“As a buyer, you count on your DSP to be agnostic as to where you spend your money,” said Jay Friedman, COO at Goodway Group, which offers programmatic media-buying services. “If they start diverting spend, that’s unethical. That should be done with buyers’ consent and returned to the buyer.”

Exchanges don’t like them either because they see lower-quality competitors sopping up business they don’t deserve.

“We are potentially walking away from millions of dollars as a company because we have chosen not to do this,” said one exchange that had been approached by multiple DSPs about these arrangements.

But use of this fee has only increased over the past year, sources said.

“This year, more than ever, DSPs have been coming up with unique ways to pass costs to SSPs (supply-side platforms),” an executive at another SSP noted. Lower-quality exchanges may even proactively offer a QPS rebate to avoid getting cut by a DSP.

Exchanges also said while smaller DSPs often asked for volume-based discounts in years past, they’ve been surprised to see larger DSPs with their hands out, which they view as a sign of stress in the DSP business model.

In programmatic buying, the accepted source of truth is the SSP’s or exchange’s numbers. Stakes for reconciling discrepancies between the SSP and DSP are high: DSPs can lose a lot of money if they don’t manage them properly.

But some DSPs swing in the opposite direction and control for discrepancies in a way that ensures they always end up ahead.

“Most DSPs have a hidden dial somewhere that takes an additional, small amount of every bid and reduces it to account for a discrepancy,” said Ari Paparo, an ad tech veteran and CEO of Beeswax, a DSP. “There are a few problems with that.”

“First, it’s not in people’s contracts. Second, it’s never disclosed. And third, it’s subject to abuse. You can imagine a bad actor dialing it up one day,” he said.

To control for discrepancies, a DSP might round up a $1 clearing price to $1.03 or $1.05 to account for a 3% or 5% potential discrepancy – and that may or may not be in its contract with marketers.

Exchanges, DSPs and buyers often negotiate slightly different contract terms for discrepancies, allowing for different percentage variations and, in some cases, billing based on different numbers. DSPs can use this confusion to their advantage.

One source at an exchange said that buyers increasingly ask to “split” the discrepancy fee instead of billing based on the SSP’s numbers. But it’s not clear if the DSPs are doing this because they’re also changing terms with buyers, or to pad their margin.

“If, in the natural course, some numbers are over and some are under, so be it, “said Freidman, of Goodway Group. “If the DSP has programmed its ad server to overcount such that that creates a spread for them, that is not OK.”

A similar problem exists around fraud rebates. Many exchanges are being asked to sign agreements stipulating that they don’t get paid for inventory deemed fraudulent. What’s not clear is if the DSP must in turn refund their customers.

What’s programmatic without a heavy dose of data? Extra data comes at a price. Savvy buyers usually infer that the DSP makes money when buyers use data provided by the DSP, even if this isn’t stated outright.

When DSPs offer data segments from another provider, the DSP can make money in a couple of standard ways.

The data company may give part of the fee back to the DSP as a rebate in appreciation for access to new customers. Or the DSP may mark up the data beyond the rate charged by the data provider. Some DSPs also charge their percentage-of-media fee on data, giving their margin an extra boost.

DSPs also create and charge for proprietary data products, such as custom data blends or lookalike audiences. Sometimes what they offer is truly unique, and other times it’s white-labeled from other providers.

The issue here for buyers is ensuring that the cost they’re paying matches the value provided by the DSP. Some might argue that if a buyer is willing to pay a $2 CPM for the data, the data must be worth it to them – and it doesn’t matter how much the DSP paid for it. Plus, small buyers may benefit from the DSP’s negotiating power with data providers.

However, large buyers often do better by striking out on their own. They want to know if the DSP makes money on the data or treats it as a pass-through cost.

“We feel terms and pricing for data segmentation, verification technology and inventory should be controlled by GroupM and not outsourced,” noted Sarah Warner, digital investment lead for programmatic and video at GroupM. “If you opt in to a DSP’s marketplace of data or media, you need to be aware of what fees are not disclosed.”

When buyers opt in to a DSP’s special slices of ad inventory, such as a curated market or pool of video inventory, they pay for that privilege. As with data costs, the mark-up for access to that supply is usually not disclosed to the buyer.

In the video market, for example, a video DSP might lock up publisher ad space, Paparo said. “When you have any curated supply, the DSP is taking a piece of the action.”

Other curated markets, which might be screened for quality, viewability or fraud or negotiated at a special rate, often give DSPs a margin. As with data fees, that’s not necessarily a bad thing, especially for smaller buyers who appreciate the access and often benefit from lower overall cost.

But some buyers, skittish after the hidden margins at agency trading desks, want to know what’s being charged. And as with data, large buyers can often do better by negotiating deals themselves.

“I’m focused on procuring inventory with our leverage, with our marketplace vision and scale,” GroupM’s Warner said.

Many of these practices have flown under the radar, until now.

While the exchange side of programmatic has been forced to become more transparent and lower fees due to multiple lawsuits and a customer backlash, DSPs simply haven’t endured the same level of scrutiny.

“Some of these dirty tricks live in only one segment of the DSP space,” explained Chris Kane, founder of consultancy Jounce Media. “With the hidden-fees business model, DSPs lead with an attractive headline price that’s also insufficient to be profitable. In addition to the headline number, they capture other fees that give them reasonable economics.”

While some of these fees have been in place for years, others are popping up to keep DSPs afloat.

“Very few businesses can afford to be DSPs today,” said Emily Del Greco, a consultant who previously worked at Google, a huge DSP, and Adelphic, a small one. “The costs of servers and other infrastructure is high, and you have to have scale to be competitive. Meanwhile, no one wants to pay a DSP fee, and there is downward pressure there.”

The Future Of Hidden Fees

If exchanges have been forced to cut out all their hidden fees over the past year, will DSPs bow to the same pressure? Or will they defend their margins?

The SSP Rubicon Project, for example, once posted take rates of 25%. Now, it plans to lower them to the 10-12% range. Meanwhile, one of its competitors, AppNexus, claims to charge an 8.5% sell-side fee.

On the DSP side, fees remain higher. However, unlike the hidden, variable fees that SSPs like Rubicon charged until recently, DSP take rates rise when buyers choose add-ons that carry fees.

The only public company DSP example, The Trade Desk, posted a 19.7% take rate in 2016, according to an estimate by Kerry Rice, Needham and Co.’s managing director. According to The Trade Desk, its primary source of revenue is a percentage-of-media fee and data clients buy in its platform.

Before being bought by Adobe at the end of 2016, TubeMogul CEO Brett Wilson stated in the company’s final earnings call that the DSP’s take rate stood at 21.6% and it planned to integrate more “merchandising layer” fees for data and brand safety to maintain its take rate “even as tech fees may go down.”

“[DSPs] don’t appear to be sustainable businesses anymore based on their platform fee alone without nickel and diming via other fees,” Del Greco said. “That concerns me because you end up with Google, Facebook and Amazon if no one else can afford to keep up, innovate and fund great R&D with their income.”

Costs for running a big DSP and a small one are similar, Kane said, which hamstrings smaller companies and forces them to charge hidden fees.

“DSPs are largely a fixed-cost business dominated by the cost of listening to the bidstream,” Kane said. “Tier-two DSPs have no prayer of running a low-fee business because they have no scale.”

In contrast, the industry’s biggest DSP, Google’s DoubleClick Bid Manager, has so much scale that it doesn’t feel the increase in QPS the way smaller DSPs do. It even offers some of its data for free and lets others’ data slide through as a pass-through cost.

“We understand that there will be fees in different parts of the supply chain,” GroupM’s Warner added. “A fee is not necessarily a bad thing. We strive to know what fees exist and what value they create.”