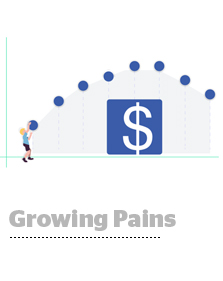 Even Facebook isn’t impervious to the downstream effects of repeated scandals, macro privacy trends and the law of large numbers.

With Cambridge Analytica, the General Data Protection Regulation (GDPR) and flatlining use in North America, which is Facebook’s most lucrative market, the buck had to stop, or at least stall, sometime. It did so on Wednesday evening when CFO Dave Wehner gave investors a reason to need a beer or three after work.

“Our total growth revenue rates will continue to decelerate in the second half of 2018,” Wehner told analysts on the company’s second-quarter earnings call, “and we expect our revenue growth rates to decline by high single-digit percentages from prior quarters sequentially in both Q3 and Q4.”

In other words, the Facebook bears are having an “I told you so” moment.

Facebook also missed its Q2 revenue estimates by $120 million, mere pocket change for a company that brought in more than $13 billion in ad revenue for the quarter. And analysts might have written off that small loss if it weren’t for Wehner’s portentous reading of the tea leaves. This isn’t just one quarter we’re talking about.

Facebook’s stock immediately plummeted more than 20 points and the company’s market capitalization shrunk by around $130 billion, which is more than some public companies are even worth.

Wehner gave three reasons for his gloomy guidance: currency headwinds, a slower monetization rate for new ad products, such as Stories, and the fact that Facebook is offering users more choice on how to manage data and privacy.

Beyond policy changes, cleaning up the platform doesn’t come cheap. Facebook is investing billions per year on its safety and security efforts, Wehner said.

But Facebook’s own size and its reliance on an ad-driven monetization model also are major factors in the platform’s revenue growth slowdown.

A platform as large as Facebook can’t continue to grow forever. There’s simply a limit to the size of the human population and the amount of time in a person’s day. Recent atrocious headlines are only speeding the process along a bit quicker.

“Such a development should not be surprising,” wrote Pivotal analyst Brian Wieser in a note following Wehner’s comments. “Digital advertising and advertising more generally has real limits to growth, although we recognize that most of the investment community has ignored this consideration.”

It’s the perfect storm of controversy and the inevitable slowdown of user engagement with a few wildcards, like GDPR, thrown in.

Users not so friendly

Facebook use was mostly flat in North America and Canada, as it’s been since mid-2017. Worldwide, Facebook added only 22 million daily active users for the quarter, the most diminutive user growth rate in around seven years.

But Facebook still has Instagram, WhatsApp and Messenger to shore up its growth story. For the first time, Facebook this quarter shared what it’s calling a “familywide audience metric,” Facebook’s best estimate of its deduped audience. In June, 2.5 billion people around the world used at least one Facebook app.

Although Facebook will continue to break out numbers for its monthly active users – 2.23 billion last month – providing a blanket metric is a handy way to disguise any user slippage from core Facebook. How can an advertiser argue with 2.5 billion users, regardless of where they are?

With that in mind, some investors, including Wells Fargo analyst Ken Sena, are still firmly in the bull camp. Although Q2 user levels for Facebook overall weren’t anything to write home about, the promotion of Stories within core Facebook still has a lot of monetization runway, Sena wrote in an investors’ note.

Facebook is heavily promoting its engagement experiences – Stories, in particular – across Instagram and the core platform, and there’s a “robust” opportunity despite Facebook’s revised downward guidance, Sena wrote.

Possible trouble across the pond

Turning to Europe, however, monthly and daily active users actually declined by 1 million and 3 million, respectively, which perhaps was to be expected. The General Data Protection Regulation went into effect at the end of Q2.

Facebook COO Sheryl Sandberg told investors that GDPR had no palpable revenue impact this quarter and that she was encouraged that most users “affirmed that they want us to use information, including from the websites the visit, to make their ads more relevant.”

Sounds good on its face, but the company is far from “out of the woods,” according to Wieser.

“The bundling of consent for Facebook to use consumer data with access to the platform appears to be an aggressive interpretation of GDPR,” he wrote, “and one that might be more subject to eventual regulatory action.”