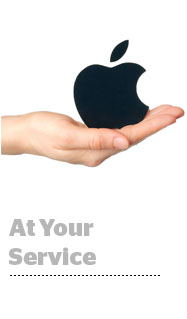 Apple actually mentioned the word “advertising” on its earnings call.

Although iPhone sales were weak during the holiday season – Apple experienced a 15% slide in phone sales for the three-month period ending in December – services revenue grew 19% for the quarter to $10.9 billion, clocking in at $41 billion for the year.

Apple says it’s still on track to double its services revenue to more than $100 billion by 2020.

Search ads is only a small portion of the overall services revenue – Apple didn’t go into specifics – but the business is reportedly worth around $1 billion.

The percentage of users paying for at least one service is expanding because Apple keeps beefing up its services portfolio with new additions, said Maestri. He pointed to Apple Pay, Apple Music – which now has more than 50 million paid subscribers – and “an advertising business in our App Store.”

Apple’s install base increased from 1.3 billion active devices early last year – 900 million of which are iPhones – to 1.4 billion at the end of 2018.

Services generate revenue for Apple, of course, but they also make its devices stickier at a time when people are holding onto their existing phones for longer rather than shelling out for expensive new replacements – not to mention the weakening economy in China, where Apple’s revenue fell by $4.8 billion from last year, mainly due to diminished iPhone and Mac sales.

But services also provided a silver lining in China.

“[But] we don’t measure our success in 90-day increments,” Cook said. “We manage Apple for the long term and when we consider the keys to our success over time there are three that stand out: our highly satisfied and loyal customers, our large and growing active installed base and at the heart of it all our deeply ingrained culture of innovation.”