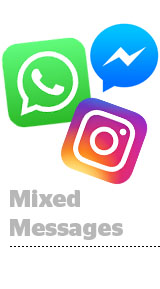 Alarm bells are ringing all over the place.

The Irish Data Protection Authority says it’s going to be “very closely scrutinizing” the situation, particularly where it might involve the sharing and merging of personal data between different Facebook companies; Sen. Edward Markey (D-Mass.) issued a statement of great skepticism (“We cannot allow platform integration to become privacy disintegration”); and Rep. Ro Khanna (D-Calif.) tweeted that Facebook’s integration plan is exactly why “there should have been far more scrutiny during Facebook’s acquisitions of Instagram and WhatsApp.”

So, why would Facebook do it? Facebook says it’s to make its messaging services “fast, simple, reliable and private.”

But merging the messaging capabilities within WhatsApp, Messenger and Instagram could also make that combined ecosystem more attractive to advertisers – if Facebook can avoid running afoul of the General Data Protection Regulation (GDPR) and dodge a righteously angry Congress.

Messaging is now one of Facebook’s three main focuses, in addition to Stories and video, as it transitions its monetization strategy away from a reliance on the news feed.

If Facebook can figure out how to effectively monetize messaging apps via advertising, “a consolidated backend speeds development, which is a competitive differentiator in the break-things-fast tech world,” said Brigitte Majewski, a VP and research director at Forrester.

But, just like the messaging integration process itself, it’s still very early days for monetizing messaging.

Although rewriting the underlying code to merge the backends of Messenger, Instagram and WhatsApp could theoretically consolidate ad inventory across the platforms, “there isn’t much ad inventory to consolidate at the moment,” Majewski said.

Businesses can’t advertise within Instagram direct messages, WhatsApp advertising is still in beta and brands are “barely advertising in Messenger,” she said.

“Brands haven’t yet shown they know how to market to users in a messaging app environment without being terribly invasive, and messaging app users certainly aren’t clamoring for it,” Majewski said.

If Facebook knows anything, though, it’s how to make it easy for advertisers to spend money on its platform. The ad buying process is consolidated across its properties. When an advertiser logs into Facebook Ads Manager, they can tick a box to expand their ad placements across the Facebook feed, the Instagram feed, Facebook Stories, Instagram Stories, in-stream video, Messenger, the Facebook Audience Network … and so on.

“I expect as WhatsApp rolls out advertising, that placements there will also be part of Ads Manager,” said Debra Aho Williamson, a principal analyst at eMarketer. “This new initiative to knit together the backend of Facebook messaging platforms is coming on top of what is already going on in the backend of the ad buying infrastructure.”

Beyond the bottom line, weaving Facebook’s messaging services more tightly together could also make it more difficult to break up Facebook if there’s an antitrust action.

The purpose of antitrust law, in the United States at least, is to protect the interests of consumers by encouraging competition.

But by unifying the code bases for its messaging products, Facebook could argue that it’s making the messaging experience better by enabling people to more easily connect across networks, while also improving security by bringing WhatsApp-level encryption to all users.

“Wouldn’t it be ironic if Facebook found itself subject to regulation for antitrust and not for consumer privacy explicitly?” Majewski said. “Merged or separate, has Facebook meaningfully demonstrated its ability to enable consumer privacy? No.”