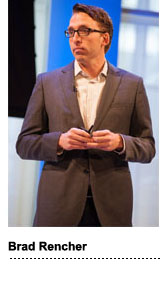 Rencher, who as EVP and GM Digital Experience set the vision and strategy for the software giant’s digital marketing platform initiatives, first joined Adobe in 2009 through the acquisition of Omniture, which later became Adobe Analytics, a key component of the Adobe Marketing Cloud.

Adobe describes Rencher’s departure as an “organizational change,” but it’s unclear exactly what precipitated it – and there’s no replacement for his role as of yet.

According to Adobe, company CEO Shantanu Narayen is going to create a new “broad” organization that comprises product, sales, marketing, services and support with Narayen at the helm until Adobe can find a new person to run it.

Adobe did not immediately respond to a request for comment.

A seasoned Adobe vet like Rencher would seem like the ideal candidate to lead the business group. Rather than grabbing the reins, though, Rencher will serve as a temporary “special adviser” while Adobe hunts for someone permanent.

Rencher is exiting at a time of wild growth for the Adobe Experience Cloud, which serves as an umbrella for Adobe’s Marketing, Analytics and Advertising products. Experience Cloud does not include Adobe’s creative or document management tools.

During his tenure at Adobe, Rencher was a principal architect of the company’s digital marketing strategy and directly responsible for helping build and integrate the Adobe Experience Cloud.

Rencher was there in 2011 when Adobe acquired its demand-side platform Demdex; in 2013 when Adobe scooped up cross-channel marketing automation company Neolane; three years later for the purchase programmatic video platform TubeMogul; and during the heady latter half of 2018 when Adobe spent nearly $6.5 billion combined to acquire ecommerce platform Magento and B2B marketing platform Marketo in quick succession.

“It’s not an exaggeration to say that he’s played a major part in providing continuity, leadership and vision for creating one of the most successful marketing technology vendors where so many others have struggled,” said Joe Stanhope, a VP and a principal analyst at Forrester. “He leaves the group set up for success.”

The reorg and the direct involvement of CEO Narayen also “shows us how seriously Adobe takes their marketing cloud division and how important it is to the future of the company,” Stanhope said.

“They are gearing up to cross the next major divide, which is bringing Marketing Cloud and many other offerings into a broad, competitive and compelling customer experience offering for enterprises,” he said.