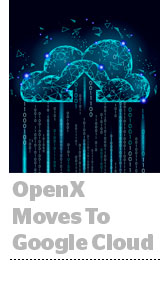 OpenX signed a five-year deal with Google Cloud Platform worth more than $110 million that will move its infrastructure completely to the cloud.

OpenX is transitioning to the cloud within six months, and it expects the transition to be completed by Q2 of 2019.

Once complete, OpenX expects its publishers and buyers will see several benefits. Speed will improve, helping OpenX to become more agile. The exchange will also be able to handle sudden spikes in traffic more seamlessly and expand to new markets without setting up local servers first.

“We will respond faster and we will scale faster,” said OpenX CTO Paul Ryan. “We won’t have fill rates drop because we are overloaded.”

OpenX plans to use its new cloud infrastructure to add more data to its bid requests later in 2019, making ad impressions more valuable to publishers and marketers.

“We are going to do more in the people-based marketing arena, which is handling lots of data and solving the problem of matching the data to the consumer. That is the world’s biggest marketing problem today,” said Tim Cadogan, CEO of OpenX.

OpenX said it’s the first major exchange to move completely to the cloud.

Like many of its peers, OpenX operated with a mix of on-premise servers supplemented with cloud infrastructure. A quarter of its technology staff focused on maintaining its server infrastructure. Programmatic advertising is particularly infrastructure-intensive: Companies must manage billions of bid requests and return those bids within 100 milliseconds or less. More requests add costs, leading DSPs in recent years to throttle queries per second to save money and companies like Rubicon Project to buy nToggle to lower infrastructure costs for its partners.

Although conventional wisdom says that the cloud is three to four times more expensive than running your own servers, moving 100% of its business to the cloud allowed OpenX to negotiate lower rates with Google, Ryan said.

But isn’t Google the competition?

“It is a multifaceted company,” he said of Google, adding, “They are one of our largest partners with DBM [Google Marketing Platform].”

“We will basically be co-located with DBM, so we can run auctions faster,” Ryan said.

In December, OpenX laid off 100 people as it plotted a TV-focused future. The layoffs were also influenced by its changed staffing needs from its move to the cloud, but also spoke to broader changes OpenX is making in its business. Going 100% to the cloud will make it simpler to implement more dramatic changes in its business.

An on-premises server setup “inhibits innovation,” Cadogan said. “We think the industry is in a commoditization cycle right now, and there is still radical innovation to be made in this space.”