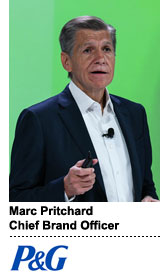 This summer, P&G posted the best quarter of sales growth in a decade, and its stock price has nearly doubled since spring 2018.

To create that growth, P&G is increasingly grabbing the reins, Chief Brand Officer Marc Pritchard told attendees at the ANA Masters of Marketing in Orlando, Florida, on Friday.

P&G’s progress came after it allowed its brands more autonomy to determine what marketing they wanted to do themselves when they wanted to work with an agency.

Agencies still get P&G budgets, but the terms are different. After cutting more than $1 billion in waste from agency relationships, the CPG giant adopted a methodology where, besides the traditional retainer it pays to some agencies, all extra projects are up for grabs for multiple agencies, without an annual cost.

P&G’s move to take more control over its own marketing activities has also given it more insight into its customers. P&G has amassed over 1.5 billion online IDs globally, which it’s using to build smart audiences.

For Olay Regenerist, it tested a basic demo of women ages 25-54 and a “smart audience” created from its ID program, which allows it to target based on demographics and behavior, like prior purchasing or sampling. P&G’s campaign targeting “smart audiences” spent 10% less while increasing sales by 20%.

Finally, P&G hopes to bring more transparency into the ad ecosystem. After a rallying cry from Pritchard to fix the “crappy media supply chain” in early 2017, his next issue is getting platforms to share data so P&G can control ad frequency across walled gardens.

AdExchanger: You’ve been at P&G for decades, most recently overseeing a huge transformation. Meanwhile, everyone else is hiring a new CMO every two years. What’s going on?

MARC PRITCHARD: This is part of our company’s transformation that’s been in place for several years and now starting to bear some fruit with our results. We reduced our portfolio from 16 categories to 10 categories where performance drives brand choice. We raised the bar to be noticeably superior in products, packaging, brand communication, retail and value. We changed our organizational structure to go faster, and we had to increase productivity in every single aspect of our business. Now, we are on our second round of saving $10 billion as a company.

A few years ago, P&G consolidated its agencies – why is it now adding more?

We never really centralized. We had thousands of agencies, and incredibly high costs in both fees as well as production. We were doing too much for too little impact. We did consolidate into fewer shops, and we started to be more discerning in what we do – in getting the right fee structure – and then we realized we could probably do a more flexible approach, where we have fixed retainers for some, like a core agency, but give us the ability to flow in and out.

P&G moved some programmatic in house this year in the United States. How’s that going?

Most of the in-housing around media has been planning, particularly in places like China and the United States where we have enough data, and science, and analytical skills. China is pretty advanced from an automation standpoint. We can do media planning using the databases we have. Then programmatic execution can be done by P&G people, or an agency.

How are you getting these 1.5 billion consumer IDs?

We’ve been bringing in consumer IDs for years. It’s a combination of device IDs that we can then, through algorithms and other things, define an anonymous consumer ID, and then PII data, that happens when you open in and give your name, address, email.

Are you getting these IDs by working with publishers – a kind of Hawkeye version two?

That’s part of it. Through media buying and through linking with publishers. That’s where you get a lot of device ID data that you can turn into consumer ID data. On the PII part, or first-party, that’s more through our consumer relationships marketing platforms, websites, apps where we’re engaging with people, and as we do more direct-to-consumer.

A few years ago, you talked about how P&G had gone too narrow with its targeting and saw performance dip. What’s different about these smart audiences?

That was on Facebook, where we were trying to do more micro-targeting, and ended up putting so many filters on it we were reaching too few people. Microtargeting might be fine, might get nice sales, but there’s not enough reach. We had to learn about how to get an audience where it’s mass reach, but with greater precision. That’s what the smart audiences are about, reaching these people that have the highest propensity to buy with less waste. And with the programmatic piece, we can cap frequency – that’s why we call it mass reach with one-to-one precision.

What’s your focus right now in terms of transparency and measurement in media?

The nice thing about programmatic is being able to cap frequency across platforms. We had a lot of waste through excess frequency. We’d like that across all platforms. The next phase is getting a signal into the walled gardens, because that’s where we don’t have the visibility. That’s the next frontier on transparency: cross-media data. So we can get transparency, so we don’t waste money, and most importantly so we don’t annoy consumers with excess frequency.

How optimistic are you about this mission – since these platforms are raising their walls in the name of privacy?

We’re making more progress than we’ve ever made. They [the platforms] are really trying to find a solution and do it in a privacy-complaint way. We want it to be privacy-compliant, no question about that.

P&G doubled its stock price and returned to sales growth. What role did programmatic play?

Moving from mass blasting to mass reach, one-to-one precision has helped us get substantial efficiencies in media, which then allows us to grow. That’s helped us in the cycle: You raise the bar on superiority, you find ways to get more productive, then you reinvest back in superiority, reach more people, and the cycle continues.

How do you influence what’s going on in areas like packaging or product, if your advertising observations indicate consumers want something else?

Our teams are very integrated in how they operate. We try not to look at things in silos, and that fuels growth.