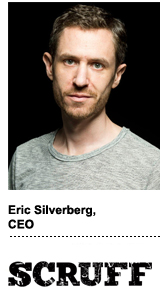 Scruff has a love/hate relationship with programmatic advertising.

When the gay dating app, which now has more than 12 million users, first came on the scene in 2010, its monetization strategy could pretty much be summed up in one word: AdMob.

But in January, the Grindr competitor decided to remove all its banner ad slots and stop selling its inventory programmatically. Today, subscriptions and in-app purchases make up around 80% of its revenue, and a direct ad sales team is responsible for rustling up the remainder.

Over the years, Eric Silverberg, Scruff’s CEO and co-founder, had become increasingly disenchanted with programmatic CPMs that were “in the basement” and a fill rate from some ad networks as low as 10%.

Some brands shy away from dating traffic, citing brand safety concerns, which makes it tricky for Scruff to monetize with advertising.

Scruff has also had trouble with Facebook. The app was barred from advertising on the platform about four years ago without explanation. Silverberg assumes Scruff ran afoul of Facebook’s inscrutable content policy, although he’s never been able to figure out exactly what to do to get the ban lifted. Having reached scale, Scruff mostly relies on word of mouth for its user acquisition and self-promotion efforts.

“There’s this 21st-century notion rooted in morality that anything gay is pornography,” Silverberg said. “And in terms of the more traditional brands, all they’re doing when they wring their hands over the brand safety of dating apps is allowing direct-to-consumer brands to come in and clean up.”

D2C brands make up a good portion of Scruff’s advertiser base, the sort of “smaller, scrappy upstarts selling soaps or beard oils that never would have been able to launch even 10 or 15 years ago, but now they’re going in with guns blazing and doing savvy digital advertising,” Silverberg said. The company has had to staff up to support the move away from programmatic, but it’s been worth it, said Silverberg, who noted that “now we don’t have to split revenue 60/40 with yet another ad network.”

Scruff is also spared the awkwardness of having to explain the concept of ad tracking to its user base. A substantial portion of Scruff’s users are in Europe, and to keep running programmatic advertising running after GDPR the app would have had to gather informed consent.

But rather than being compelled “to present our users with an onerous and shady-sounding dialogue box asking them if they’re okay being tracked by an ad network, we decided to just turn off programmatic in the EU,” Silverberg said. “And then we thought, well, if we’re not comfortable running programmatic ads for our European members, then why are we doing it for our US members or anyone else? So, we shut it all off.”

Programmatic may have been kicked to the curb, but advertising is still a healthy part of Scruff’s mix, and it’s a valuable way for brands to reach gay, queer, trans and bi men, Silverberg said.

“We see the direct ad business as an extension of our mission by creating an opportunity for gay-owned businesses out there that are sometimes denied an outlet to advertise what they do,” Silverberg said. “But we’ll also run lube ads on Scruff because, hey, it’s a product that everybody buys – gay, straight – and there’s no shame in that. We love that we can connect these advertisers with our community just as much as we can for any apparel brand.”