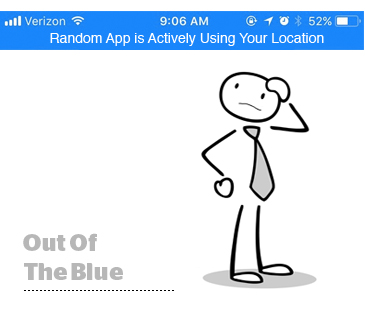 Location-based apps are getting an unexpected reprieve from Apple’s blue bar mandate, an overlay at the top of the phone screen designed to tell users how and when apps are using their location data.

In the fifth beta of iOS 11 (the mobile operating system is set to ship Sept. 13), Apple reversed course on its plan to require all apps to overtly notify users when accessing their location in the background. Under the modified rules, apps that users allow to persistently track their location will not have to show the blue bar.

Twenty-one percent of apps are authorized to continuously track location in the background, according to data released by Apple at its Worldwide Developers Conference.

“If you got ‘always’-level permission from the user, it used to be that the blue bar would never appear, the thinking being [that] the user already consented to being tracked all the time, so they don’t need to be alerted about it,” said Dan Koch, CTO of Tune. “Now they’ve rolled it back so the developer can opt back to the old way.”

So why the reversal?

Apple did not respond to a request for comment, but it is in the company’s interests to keep its developers happy. Although Apple has held itself up as a paragon of privacy protection, it’s possible that pressure from the developer community caused Apple to stay its hand.

“Both Apple and Google still care a lot about the app developer ecosystem,” said Gilad Amitai, COO at location-based ad company Ubimo. “Apple is certainly not going to cut the branch it’s sitting on top of.”

Another reason could be related to the user experience. The blue bar is useful to call attention to apps that might be tracking location without a user’s knowledge, but if that user doesn’t take action to withdraw permission, the flashing blue bar becomes a nuisance.

“Unless you set the background of your iPhone to be sky blue, your phone is going to start looking really busy,” said Luca Maraschi, co-founder of LetzDoIt, a location-based app that helps people find events and activities. “At a certain point, it actually gets annoying for the user.”

“Think about a location-based dating app, for example,” said Raman Sidhu, VP of business development at location data vendor Beemray. “A person might want the app to know where they are so they can show up in searches. In a case like that, they’re happily giving up that data and they don’t need to see the blue bar.”

As one iOS developer commented in an Apple dev forum, for the blue bar to be useful, users would need the ability to turn it off after seeing the warning once or twice. “Otherwise, it’s a nanny-UI that annoys people using the iPhone,” the developer wrote.

Just because always-authorized apps don’t have to warn users when they’re actively tracking location in the background doesn’t mean they shouldn’t be transparent about how and why they’re collecting and using location data.

The LetzDoIt app, for example, needs location data to function, but only asks for it on demand when a user is looking at a map, creating an event or searching for an activity. Although the plan is for LetzDoIt to use the location data it collects to fuel its recommendation engine in the back end, there’s no need to be tracking location continuously.

“If you’re developing a location-based app, play it smart,” Maraschi said. “Unless you’re building a navigation system, you can probably avoid always-on location.”

And it’s never a smart move to collect data without providing a direct value exchange for the user.

If Apple had required a more prominent blue bar in iOS 11 for apps that collect location in the background and it had caused some users to disable location access for certain apps, well, that wouldn’t have been such a bad thing, said Ubimo’s Amitai.

“Yes, it would decrease the amount of location data being passed,” he said. “But at the same time, the quality of the data would improve, privacy would be better protected and the situation would also be better from a consent perspective.”