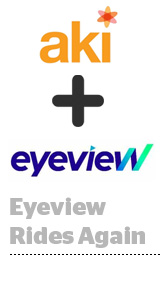 After running out of money and closing its doors in mid-December, video ad tech company Eyeview has a happy ending of sorts.

Mobile ad platform Aki Technologies on Thursday completed its acquisition of Eyeview’s assets, which include a DSP and bidder, an ad server that ingests data signals to inform which video creative to deliver and a video creation module that enables dynamic video creative optimization.

Scott Swanson, Aki’s CEO and co-founder, declined to share how much his company paid for Eyeview’s assets and patents. Four other companies were also vying for Eyeview’s tech.

Since the deal is an asset sale rather than a full acquisition, Aki only gets Eyeview’s technology, and not any of its employees, revenue or contracts. But there’s a silver lining: Aki also doesn’t inherit any of Eyeview’s debt.

Aki plans to reopen Eyeview in the first half of 2020 as a separate entity, with the intention of integrating Eyeview’s technology stack with its own during the second half of the year.

To relaunch the Eyeview business, Aki is rehiring many former Eyeview employees in data science, engineering, sales and product management. Eyeview’s former CEO, Rob Deichert, will help with the handoff and consult on the integration.

Aki has already hired 15 former Eyeview employees, and it plans to hire five or 10 more in the near term, and still more once the Eyeview business is chugging along again. But not all of Eyeview’s roughly 100 employees will get their old jobs back.

It’s been a boom time for ad tech consolidation in the last few months, and “we’ll probably see some more,” Swanson said, because small and medium-sized startups like Aki have two options in a maturing market: acquire something or get acquired.

“Eventually, there will only be a couple of players left in the space if venture capital is not flooding in,” Swanson said. “So, it’s beholden on you to become bigger yourself or become part of something bigger if you’re going to survive.”

“We don’t just want the accounts and the revenue, we want the technology and the people,” he said. “But, in an asset sale, you don’t get the people, which is why we’ve been going door to door to rehire Eyeview staff one by one.”

The Eyeview deal came together in less than a month, but Aki had been considering a video personalization acquisition for some time, Swanson said.

Aki’s technology uses a mix of data signals, including location, intent, environment, time of day and content consumption, to pinpoint when consumers are engaged in a particular activity, such as commuting or grocery shopping.

Eyeview will help Aki to move beyond mobile into other channels more quickly, Swanson said.

“The biggest thing for us is this broader trend toward personalization,” he said. “It’s not just a nice to have, it’s a must-have; people already expect it in their media content, and they’ll expect it in their paid content as well.”

Aki, which raised a small nearly $4 million seed round in 2015, has been profitable for the last three years. But the company probably won’t be profitable for the first half of 2020, since it’ll be juggling two tech stacks and two teams, but Swanson said he expects to be back in the black by the end of 2020.