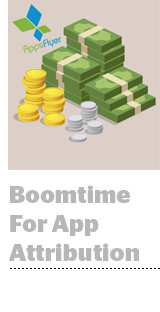 AppsFlyer said Tuesday it closed a $210 million Series D round, bringing the app measurement firm’s total funding to more than $293 million since 2014. The company had previously raised a $56 million Series C in 2017.

Investors are jazzed about the growing opportunity around data security and reducing attribution ad fraud, said Brian Quinn, US president and general manager of AppsFlyer, whose clients include eBay, HBO, NBCU, Nike, Tencent and Walmart.

“It’s a competitive marketplace, and the market needs a trusted referee to help brands understand the true performance of campaigns and to help brands control their first-party data,” Quinn said. “We’re investing a lot in both.”

Consumers are realizing how valuable their data is and how little control they have over it. The recent commotion over Grindr’s data sharing practices is clear evidence of that. But marketers are coming to the same realization about their app attribution data. It’s often unclear what happens to data once it gets shared with ad partners, and some publishers are starting to get more protective of their first-party data assets.

A chunk of AppsFlyer’s latest round of funding will go toward building products that help measure quality traffic and tools that enable marketers to better use first-party data to optimize their campaigns.

The company also needs cash to fund the more than 400 people the company hired last year, bringing its total headcount to roughly 850 across 18 offices. AppsFlyer is hiring across all roles this year, with a focus on R&D, product, customer success and staffing regional offices in the markets where its customers are based, such as Brazil and outposts in Eastern Europe.

AppsFlyer is also mulling a little M&A in the advanced measurement or predictive analytics realm, although Quinn didn’t have any specifics to share.

“We’re always thinking about M&A with the goal of remaining a long-term and sustainable business,” he said.

Which is all well and good, but what if Apple and maybe even Google, who knows, decide to kill their mobile ad IDs? Stranger things have happened. Attribution providers rely on Apple’s IDFA and the Google advertising ID to track users across platforms until they convert.

“The tools might change, the methodologies might change, but the problems we solve aren’t going away – if anything, the measurement problem is getting bigger, harder and more complex as competition increases and the dynamic shifts from third-party data to first-party data,” Quinn said. “We’re confident we’re in a position to solve for whatever the future environment looks like.”