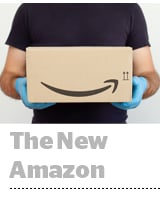 No company in the world is better positioned than Amazon to emerge from the coronavirus pandemic stronger.

Most advertising companies suffered a painful contraction in March. But Amazon’s advertising revenue was up by about 40% in Q1 compared to the year before, accounting for most of the $3.9 billion Amazon earned in its “Other” business category, according to the company’s earnings report released on Thursday.

Amazon doesn’t report advertising revenue figures, but CFO Brian Olsavsky told investors that the Q1 ad growth rate was in line with Q4 2019, when he disclosed that it grew at a 40% clip.

Amazon also benefits from the tailwinds propelling certain categories right now, such as food and grocery delivery, essential home product sales, in-home entertainment and even remote work and telemedicine. (The Amazon Web Services cloud benefits as bandwidth and data storage costs rise.) And it’s relatively unaffected by the pandemic’s crushing headwinds: Sectors such as travel and hospitality and automotive are the hardest hit, representing billions of dollars in losses for Google’s ad business, for example, while those verticals are relatively unimportant for Amazon.

But don’t say Amazon is profiting from the crisis.

“If you’re a shareowner in Amazon, you may want to take a seat, because we’re not thinking small,” CEO Jeff Bezos wrote in a statement.

What Bezos meant is that – for the short-term at least – Amazon will sacrifice profitability as it incurs higher costs due to the pandemic. Its Q1 profit was $2.5 billion, down from $3.6 billion a year ago.
The axe will fall in Q2, when Bezos said the company expects to zero out any potential profitability with $4 billion or more in COVID-19 response costs. Amazon is ramping up an internal program to test hundreds of thousands of employees for the coronavirus without relying on commercial testing.


Even if profit runs dry for a spell, the business will be stronger on the other side, Olsavsky said. And that’s particularly true of advertising.

“Our advertising will prove to be very efficient,” he said. “So even as some advertisers cut back on costs, I think this will show its value.”