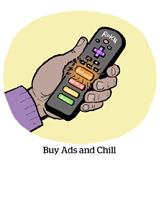 Roku said Tuesday it rebranded dataxu, the DSP it acquired last October, and is introducing it as a programmatic ad-buying platform called OneView, with capabilities powered by Roku’s first-party data.

OneView was the name of a dataxu’s cross-device identity graph, which is joining with Roku’s data from 39 million US households to combine programmatic performance measurement with streaming and OTT campaigns.

“One of the most attractive things about dataxu during the acquisition was their deterministic device graph, the use of mobile IDs and other identifiers to make sure they aren’t reliant on cookies,” said Roku VP of ad sales and strategy Alison Levin.

Brands and agencies using OneView will be able to buy against guaranteed outcomes, like site traffic, sales lift or paying only for ads served to households that can’t be reached by linear TV campaigns.

Other DSPs will still be able to buy Roku inventory. But buyers wanting the new guaranteed buying options with Roku’s first-party measurement will have to go through OneView.

Campaigns on OneView also won’t return ad IDs from Roku devices, as typical programmatic campaigns would, since those ads use Roku first-party user data, and thus advertisers would be able to create segments and retarget Roku users without consent.

The idea is similar to clean room services from platforms like Google and Amazon, where advertisers log in to measure and optimize campaigns, but can’t extract user-level data. But Levin said OneView differentiates from walled garden clean rooms because advertisers can use third-party measurement, verification and ad-serving services like Nielsen, Oracle Data Cloud or Innovid.

“We are a consumer-first product,” Levin said. “A reason this DSP made so much sense during acquisition was it would allow brands to access those audiences and measure against them in a controlled environment.”

One of OneView’s advantages will be in optimizing campaigns based on Roku’s user household data. For instance, Levin said that as states re-open from quarantine, advertisers will be able to dynamically choose messaging to drive people to open stores, or have a call-to-action to download an app or order delivery.

It is not a coincidence that two of OneView’s early adopter brands are Drizly, a booze delivery app, and the supermarket chain Giant Eagle.

OneView will buy across any video supply that dataxu had addressable access to. The Xandr advanced TV SSP, for instance, or other OTT platforms like Hulu that have open exchanges, are all in the mix.

Roku always had this plan for dataxu – which is also why Amazon Fire TV booted dataxu out of its addressable ad-buying program shortly after its acquisition.

But the Amazon Fire TV program is more open than Roku’s OneView, since Fire TV actually does allow programmatic ad IDs to be pulled from campaigns (though dataxu’s removal left only the Trade Desk and Amazon’s own DSP in the program), and Amazon wasn’t going to expose competitive data on audience and inventory to its direct rival.

“We knew advertisers already had their platforms for search, social and shopping,” Levin said. “But they didn’t have a single platform for one of the most important S’s: streaming.”