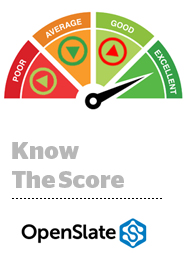 TV’s got Nielsen (sort of), but there’s no universal metric for video content quality across platforms and the open web.

OpenSlate wants to fill that gap with a revamped SlateScore, its rating tool that grades video content quality for engagement, consistency, momentum, reach and brand safety.

Watch monthly viewers doubled to 720 million between December 2018 and June 2019. The amount of ad-supported content began hockey-stick growth in August 2018 when Facebook opened up monetization to more publishers on Watch.

Quantifying quality is tricky though, said OpenSlate CEO Mike Henry. Video that is professionally produced or has high engagement, for example, doesn’t guarantee that it’s valuable or safe for a particular brand.

“If Alex Jones does a cooking video, we do not characterize that as a regular cooking video – we want to be as far away from something like that as possible,” said Joe Barone, managing partner of brand safety for the Americas at GroupM, which has worked with OpenSlate since the first YouTube brand safety crises in 2017.

OpenSlate’s quality score was created when the company was founded in 2012, so the algorithm needed an upgrade, which took six months.

When OpenSlate first launched, half the battle was convincing buyers that there was quality content to be had on YouTube at all.

“People would point to YouTube and say, ‘It’s all crap,’” Henry said. “Well, OK, but people are spending a lot of time there, so you need to be there, too. Initially, it was just about answering the question for people: ‘What does good look like when it doesn’t look like TV?’”

Over the years, as buyers shifted dollars over to YouTube en masse – we now know that YouTube has a $15 billion a year ad business – filtering for quality required more nuance and bigger guns.

Now the real value of a content rating comes from its extensibility.

OpenSlate hopes to announce “at least two more major platforms” in the first half of the year. Obviously, TikTok would be a priority, and there’s also a lot of video content outside garden walls.

In late 2020 and 2021, it will collaborate with Nielsen to measure other forms of online video, including OTT. Nielsen bought a minority stake in OpenSlate in September.

“We need to be able to consistently measure and understand all of the different environments,” GroupM’s Barone said. “If we have to use different tools for each environment, it’s hard to put together a plan that matches a brand’s particular brand suitability requirements and risk tolerance.”

OpenSlate first started measuring Facebook in January 2019, when Facebook began allowing third parties to manage brand safety on its platform via blacklisting. In November, Facebook evolved its solution to allow advertisers to create whitelists, also with the help of third parties.