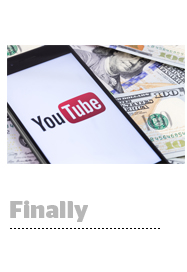 YouTube drove $15 billion in ad revenue in fiscal 2019, according to Alphabet’s Q4 and FY results, released Monday. Read the release.

This is the first time Google has disclosed YouTube’s revenues, which have grown briskly over the past three years – from $8.2 billion in 2017 and $11.2 billion in 2018.

Alphabet will now report revenue “on a more granular basis,” said CFO Ruth Porat. That means breaking out search ad revenue, YouTube’s yearly benchmark and the annual run rate for the cloud business – an inexact metric since run rates extrapolate the next 12 months based on the past quarter. Google Cloud now has a $10 billion annual run rate.

Breaking out YouTube ad revenue is a long-awaited concession to investors and industry observers, who haven’t been able to accurately forecast or analyze the video platform or understand how it factors into Google’s overall business.

“I’m sure you’ve already heard this a million times, but thanks so much for your enhanced disclosure,” said the first investor to speak during the call.

YouTube’s $15 billion in 2019 revenue translates to only $7-8 per user per year, based on YouTube’s 2 billion users, said another investor. For comparison, that’s roughly equal to Facebook’s Q4 2019 worldwide average revenue per user (ARPU) of $8.52. But for the United States and Canada, Facebook’s Q4 ARPU was $41.

Direct response ads in particular are a huge potential growth area, he said. Social networks such as Facebook, Instagram and Snapchat, a group in which YouTube can now be lumped into with a more reliable ARPU metric, feature many direct response product brands. And YouTube hasn’t yet tapped commerce and direct-to-consumer brand opportunities.

YouTube users are increasingly consuming and looking for goods and services on the platform, Pichai said. The question for Google, he said, “is how can we create better commerce experiences?”

Google also created a new “Google Other” earnings category that encompasses hardware sales revenue and non-advertising products – primarily subscription services such as YouTube TV and Google Play Music. This is different from “other bets,” where it still reports revenue for Verily Life Sciences, Waymo, Fiber and other subsidiaries.

Amazon also has an “Other” segment for its earnings, but it does the opposite by packing all of its advertising revenue into that category.