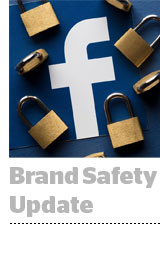 Facebook is allowing advertisers to whitelist content as part of an overall improvement to the brand-safety controls on the platform.

Brands can use the controls, still in alpha, to create whitelists of publishers for in-stream video and Facebook Audience Network.

“Whitelists have been a request for advertisers for some time,” said Carolyn Everson, Facebook’s VP of global marketing solutions.

A separate test will allow brands to work with partners to create “dynamic content sets,” or frequently updated lists of brand-safe content. These sets can dynamically update whitelists for advertisers using Facebook’s brand-safety tools. OpenSlate, Integral Ad Science and Zefr are part of this initial test.

The whitelists will require brands to prioritize brand safety over ad pricing and scale, which may limit their appeal to some of Facebook’s 7 million advertisers. But enterprise-level advertisers with high brand-safety standards – including those that pushed Facebook to add whitelists – prize control and transparency over lower costs.

“They’re typically not price-sensitive on these things. They’re more concerned about the environment they’re in,” Everson said.

“The universe of ad-supported video content on Facebook has grown substantially over the past year, and the advertisers who have a lot of sensitivity to where they run would prefer to build up a whitelist vs. knock out where they want to run,” OpenSlate CEO Mike Henry said.

Facebook also made it easier for enterprise-level marketers managing dozens of campaigns to manage brand-safety controls. They can now set brand-safety standards at the account level, not the campaign level. They will also be able to view lists of where their ads ran within the Facebook UI in addition to downloading them.

Facebook generally doesn’t believe brand safety is a problem for its news feed ads, which is why it only recently started tackling the issue more aggressively.

Facebook created community standards for acceptable content in 2017, which Everson called “the beginning of our brand-safety journey.” The same year, YouTube faced its first major brand-safety scandal, as brands discovered that their ads appeared next to terroristic content.

“We want to make sure advertisers have choice in any surface or ad unit we introduce, until it has the right set of brand-safety controls,” Everson said. “Brand safety is embedded in everything we do and how we develop our products.”

As a bonus, could better video brand safety help Facebook in its quest to siphon away TV advertising budgets from cautious video planners? Everson says no.

“This is not connected to any strategy around getting TV budgets,” she said. “It’s part of an overarching strategy to ensure people have a safe and secure advertising experience.”