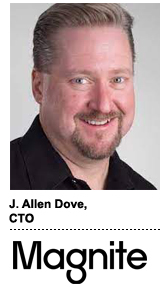 Magnite is shaking up its leadership team following the late April approval of its $1.17 billion acquisition of SpotX.

On Wednesday, Magnite announced that Tom Kershaw, the company’s chief technology officer (CTO) for the past four years, will leave Magnite to pursue an opportunity outside of ad tech. Kershaw will also step down as chair of the Prebid board at the end of June. Prebid plans to elect a new chair at its upcoming board meeting next week.

There are no details as to where Kershaw, who’s been an opinionated and refreshingly vocal fixture on the ad tech scene, will land.

Rounding out the executive changes, Adam Soroca, who currently serves as head of the global buyer team, will move into a newly created chief product officer role, while Sean Buckley, formerly COO of SpotX, has been named CRO for CTV. Joe Prusz, Magnite’s current CRO, will now serve as CRO for Magnite’s online video and display business.