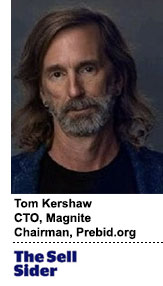 “The Sell Sider” is a column written for the sell side and contains fresh ideas on the digital revolution in media.

Today's column is written by Tom Kershaw, CTO of Magnite and Chairman of Prebid.org.

For the second time in the past 13 months, Google managed to plunge the world of ad tech into complete chaos Wednesday, despite not saying much that’s new or noteworthy. If you believe what you read, it’s the end of the open Internet as we know it, the upending of the entire publisher ecosystem, and (of course) a financial meltdown to go with it. And it’s not the first time.

Unfortunately for the sensationalists, the reality is that Google’s “bombshell” announcement was entirely predictable. And even though it ducked the important, difficult questions that the Internet faces as it charts a necessary course to a consumer-first privacy regime, I actually think this is a good thing.

What did Google say? To paraphrase: ‘We are not using e-mail address-based systems as identifiers on our properties. We are focused on the Privacy Sandbox efforts.’  This was obvious from the start.

But what’s not so obvious is its significance. Google is no longer going to use its billions of logged-in users to oppress the rest of the Internet.

What did the industry hear instead? ‘Google is shutting down UID, LiveRamp, and every other ad industry effort to solve for identity with a consent-based model.’ This is something that Google never said – and couldn’t really do if it wanted to.

Google’s announcement, which was made by Google’s Ads team, not Chrome, will have no impact on email-based identity systems such as UID 2.0 and LiveRamp’s ATS. These solutions will continue because they are based on consumer choice and opt-in.

But more importantly, user log-ins are just one part of the solution that the industry is putting forward to allow for relevant, effective advertising without third-party cookies. It’s always been the case that logins would only cover a small percentage of the overall Internet community. In fact, most analysts feel that 20% is the upper bound of how many users we can expect to opt-in to a targeted ad experience.

The majority of the Internet will need another solution and the good news is that solution already exists and is being actively deployed by publishers and advertisers based on open-source and collaboration. That solution is publisher-driven audience segments: addressable audiences created by publisher first-party data, that is collected in a privacy-compliant manner, and presented to buyers in a fully-anonymized fashion.

How did we get here? Publishers have always had direct relationships with consumers. Through those relationships, they got permission to capture data about their interests and preferences, and then use that data to deliver tailored messages and content. In the past, that data was fragmented and uncoordinated, so it didn’t provide the scale that advertisers needed.

With the evolution of identity away from third-party cookies (and towards a more privacy-friendly model), publishers have emerged as the party that’s best-positioned to obtain meaningful consent from consumers. But this time, publishers are doing it differently. Organizations such as Prebid.org (where I’m Chairman) are providing a real sandbox for them to collaborate and innovate.

Prebid publishers are creating collective standards for expressing audiences which they’re presenting to advertisers as anonymized, but highly performant segments. And it's working. Thousands of publisher-based segments are already running in production across the industry. For example, at Magnite (where I moonlight as CTO), more than 10% of our revenue is running through these curated markets – and we are just getting started.

Too much of the privacy debate is about competing solutions, but in reality, the new Internet will consist of a combination of user logins, browser-based auctions, and – critically – publisher-driven solutions that preserve the accuracy and relevancy of today’s model while providing an anonymized user experience. It’s actually really cool stuff, not the sort of thing that should elicit panic for advertisers or developers.

Ironically, the overlooked part of Google’s announcement this week was that they indicated full support for publisher controlled first-party solutions. Publishers play a key role in creating a privacy-first Internet because they are the reason consumers are online to begin with.

In the end, Google’s announcement that they will focus on Privacy Sandbox isn’t just predictable, it’s welcome. It means they’re going to actually use the same tools as the rest of the industry. Compared to the last 10 years of ad tech where Google largely left the independent Internet to fend for itself, I count this as progress. We’re finally moving in the direction of a level playing field.

To be clear, the announcement will not impact the efficacy of log-in solutions. UID 2.0 and ATS will continue without Google’s support, as they have from the beginning. Open source, transparent solutions that give consumers choice will always win. The combination of user logins, publisher first-party segments, and the Chrome-controlled solution, will all coexist to create the foundations of a new, better Internet.