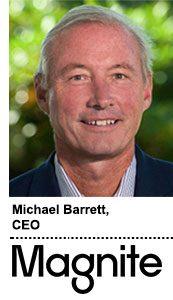 When Rubicon Project and Telaria merged just over a year ago, it seemed like the display advertising-dominant company was making its TV play.

But in the year since, Magnite’s stock price soared, going up 600% in a single year. Then, RTL Group put SpotX up for sale. So Magnite CEO Michael Barrett decided to make a move, buying the company for $1.17 billion in a cash and stock deal Friday.

“Timing is everything,” Barrett told AdExchanger Friday. “You might argue that SpotX wouldn’t have been as valuable a year ago because ad tech wasn’t being viewed as frothily, but our ability to successfully merge with Telaria set us up extremely well for this opportunity.”

He talked with AdExchanger about why Magnite is combining with SpotX and what it means for buyers, sellers and the competition.

AdExchanger: Why does it make sense to buy SpotX?

MICHAEL BARRETT: We’re in the midst of supply path optimization, and that’s just a fancy word for consolidation. Marketers and publishers want to work with fewer, more trusted folks. And the fact that we’re independent resonates extremely well.

How much revenue will be video post-merger?

Sixty-seven percent of our revenue will be video, and close to 40% will be CTV. That’s the kind of scale the marketplace is asking for.

One of the reasons you said Rubicon Project and Telaria’s merger made sense was because there was very little duplication between its publisher partners. What kind of duplication do Telaria and SpotX have?

If this was just a display play, like Rubicon buying OpenX, we never felt that was smart. Display is a different animal. It’s mostly open auction and header bidding, which by definition encourages a multitude of SSPs to compete. CTV is a different animal. It’s all PMPs [private marketplaces] and a bit more of a software business, like the Hulu relationship we have [with Telaria].

What kind of publisher relationships does SpotX bring to the table?

SpotX is quite good at device manufacturers, they were the original one in Samsung, and they’re good at live sports and live news. It’s not 100% overlap, and when it is, it’s all PMP. Buyers are looking for a consolidated home for their PMPs.

There’s a coming identity crisis in desktop, mobile web and mobile apps. Other public companies – like Facebook – are forecasting revenue impacts from those changes. Does this acquisition help steer you away from that impact?

Our stance all along on the deprecation of the IDFA and cookies in the Chrome browser was that we’ve been through this before. With Apple ITP 1.0, 2.0, GDPR and CCPA. In all instances we’ve seen a decline in CPMs, but our access to inventory is so vast, that even if we end up selling three impressions for the price of one, it’s not a crippling blow to the business. Because what we’ve never seen is ad budgets get cut.

What about identity in CTV?

CTV is an all logged-in environment, and that gives you a leg up in terms of identity and device graph. We can create very sophisticated device graphs and help our publishers federate these segments across thousands of publishers with their data sales if they so choose. We think there’s an exciting chapter ahead. There will be air turbulence, and misunderstanding: We think the value shift is coming from the DSP, which was always perceived as being very strategic, to the SSP, which was frankly considered to be the dumb aggregator of inventory.

At a thousand-foot level, SpotX was always pretty good at the demand side, and swimming upstream. Telaria and Magnite activate when the dollars are earmarked for programmatic. SpotX’s team does that, but they swim upstream a bit, and call on agencies we don’t call on, agencies that desire to do things programmatically but may not have the capabilities to do so, and turning them into programmatic dollars. That’s really important in a nascent marketplace. And they’re geographically stronger in EMEA [Europe, the Middle East and Africa] than we are.

We’ve seen a bunch of display-first companies become part of TV-first organizations – DataXu, AppNexus and Beeswax among them – why is that?

Whenever there’s a marketplace need, far be it from ad tech not to rush to it. Look, the attraction and the appeal of CTV is that people are seeing the changing consumer behavior. The bucket of ad dollars that was always outside the reach of programmatic and digital was the linear TV dollars. For the first time ever, since the start of programmatic, those ad dollars are up for grabs.