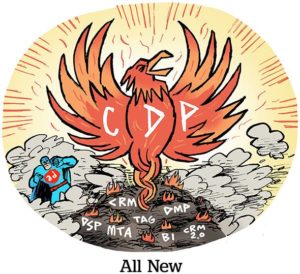 The customer data platform (CDP) craze isn’t over yet.

The CDP startup Amperity raised $100 million on Tuesday at a valuation of a little more than $1 billion dollars. The new round brings Amperity’s total funding to $187 million. Amperity last raised $50 million in Series C funding in 2019.

The billion-dollar valuation mints Amperity as the third unicorn CDP, after Segment was acquired by Twilio last November for $3.2 billion and Tealium raised $96 million at a $1.2 billion valuation earlier this year.

“When everything went down last year during the pandemic, I would have sworn that many of these massive customers with basically no revenue coming in would have either not renewed or shredded their contracts with us,” said Amperity CEO Kabir Shahani.

Instead, brands doubled down on first-party data infrastructure and on digital engagements.

It’s even common now for brand clients to use Amperity alongside other CDPs, such as Tealium, mParticle or ActionIQ, Shahani said.

“What we’re going to hopefully start to see is the recognition that a CDP is really a stack of different capabilities,” Shahani said. Some CDPs do marketing analytics and customer journey orchestration, while others focus more on cloud data infrastructure and data transfers. Often one or more CDPs is used in conjunction with a marketing cloud like Adobe or Salesforce that are also self-described CDPs, he said.

The promulgation of CDPs continues apace. Fewer brands desire a DIY CDP project, Shahani said. Many marketers originally set out to build their own identity graph and customer ID system. But most lost their appetite for the heavy engineering lift and because they needed to focus elsewhere in their business, opening more opportunities for startup vendors, he said.

The $100 million cash infusion will allow Amperity to add people to help onboard new customers. Shahani said the first 100 or so days of an integration or initial test of Amperity are critical. That’s when a brand decides to abandon the tech or make it part of the global infrastructure. “We’re going to scale our teams so we can get customers up and running and getting value from the CDP very quickly.”

Aside from a hiring push, Amperity has its eye on new product development. Clean room technology, for instance, is an important long-term focus right now.

“You can imagine an airline and a hotel wanting to facilitate a superior customer experience when they can determine someone is traveling on that airline to stay at that hotel,” Shahani said.

The data and privacy components of clean room technology are already part of the engineering road map, he said, and will be strengthened with the added funding.