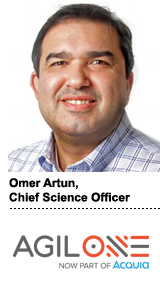 A customer data platform is about a lot more than simply combining data.

“You can’t build a good customer experience without knowing who the customer is – and the answer to that is the analytics piece, finding patterns in the data,” said Artun, who joined Acquia late last year as part of its acquisition of AgilOne, one of the original CDPs.

Artun founded AgilOne in 2005 around the notion that customer centricity would become inextricably linked with the smart use of customer data – a rationale isn’t all that different from the one behind Acquia’s decision to acquire AgilOne almost 15 years later.

“A single view combined with analytics, that is the name of the game,” Artun said. “And the battlefield is the customer experience. Acquia understands that.”

AgilOne, whose customers include Hugo Boss, Lululemon, Big Lots, Calvin Klein and Tommy Hilfiger, raised $41 million before being acquired. Roughly 30% of AgilOne’s 120 employees are engineers. All AgilOne employees joined Acquia as part of the deal, bringing the total headcount to roughly 1,000.

AdExchanger: Did AgilOne start as a CDP?

OMER ARTUN: Yes, we did. The idea was always to bring data science to customer data. Everything we’ve done since Day One has been about bringing customer data together, analyzing it, bringing insights and helping businesses execute on that data.

Why did Acquia need a CDP?

Acquia has web content management, an email execution engine, web personalization and a journey orchestration tool. But they were missing the custom data layer to power all of these things in a unified way.

We’re still in the middle of the integration, but it’s going well so far. The goal is to complete our integration with the email execution, journey orchestration and website personalization tools first, by the end of this quarter. We can already demo the integration and very shortly we’ll be selling all of these products at the same time.

The longer-term plan over the next 12 to 18 months is to integrate the entire thing with the content management piece.

Who is your typical customer and does the acquisition change that?

When we were a small company with a small execution budget, we were very focused on one vertical: enterprise retail. But Acquia works with many other verticals – pharmaceuticals, hospitality, healthcare, government – that could use CDP technology. Acquia also sells to companies of all sizes, whereas we worked more on the enterprise side. There’s now an opportunity for us to sell to smaller companies.

What are the top problems your current customers are trying to solve?

The main one is that their customer data is all over the place and they can’t combine it to define a single customer view. The solution to that is identity resolution, which means bringing the data together, deduping it and hygiening it. That is an infrastructure thing, and if you don’t do it, you can’t do anything else. From there, it’s the analytics piece.

How many customers do you have?

We manage around 150 brands worldwide across 70 or 80 customers. Some of our customers have multiple brands. As a subsidiary of Acquia, we remain our own legal entity. All of the contracts are the same, the commitments are intact and we’re still focused on the same pipeline of customers – but with additional resources and the opportunity to go after new verticals.

How long does it take to onboard a new customer?

It takes us a minimum of three months, but usually more in the four-months range. Some customers can take up to six months or a year. It’s not an easy task, because not only are you trying to get all of the customer data together, it needs to be well managed.

What data sources do you most commonly connect?

The core data set is the customer profile: transaction data, subscription data, the product catalog, channel information and behavior and event data, such as web browsing, email opens and clicks. Every single one of our clients wants to connect this type of data. But we also have customers that want to bring in other information, such as direct mail data, call center data, in-store events and even weather data.

What do you think about the marketing clouds getting into the CDP space?

They take other products and try to tweak them until they turn into a CDP, but it’s like using a knife as a fork. Salesforce buys MuleSoft, then we hear that they’re going to use their DMP as their CDP, then they acquire Datorama and now they have Evergage. I can’t comment on their strategy, because I simply don’t understand the rationale.

Who are your biggest competitors?

Not Adobe, Oracle or Salesforce, although we do see Evergage on some deals. From a pure CDP perspective, we see ActionIQ and Redpoint most often.

How does your product differentiate you from your competitors?

Let’s take Redpoint. It’s more of an on-premise build than an SaaS software, and very customizable. If a customer wants to do an internal deployment or host the technology themselves, then Redpoint is probably a good fit. But they lack analytics, and that’s a core asset for us. The same is true for ActionIQ. If all you need is a segmentation engine, work with them, but if you’re a scaled enterprise retailer, you work with us.

Take Dollar General, which is one of our clients. They have 15,000 stores and $25 billion in revenue, and we handle all of their needs in real time.