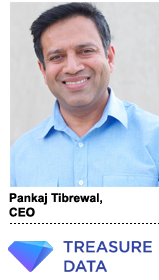 Treasure Data is betting that the internet of things (IoT) is the next frontier for customer data platforms.

“CDP as a category exists because there is so much activity-level data to take advantage of,” said CEO Pankaj Tibrewal. “We predict that more and more of that data is going to come from physical devices.”

Tibrewal was appointed CEO last week after joining the company as VP of product in 2017 at a time when “the large marketing clouds didn’t even acknowledge the need for a CDP, and even analysts were of two minds as to whether CDP is a stand-alone category,” he said.

Two years ago, Treasure Data was acquired for $600 million by ARM, a British semiconductor company purchased by SoftBank in 2016 for $32 billion. In September, United States chipmaker Nvidia agreed to acquire ARM for $40 billion in a deal that doesn’t include Treasure Data, which will now operate as an independent company owned by SoftBank.

AdExchanger: Back when ARM was Treasure Data’s parent company, why did it make sense for a semiconductor firm to own a customer data platform?

PANKAJ TIBREWAL: Treasure Data’s heritage is in big data platforms. More recently, we focused on being a CDP. ARM had been thinking about extending beyond its scope in semiconductors by building a device-to-data platform, which is something that we were doing. In other words, bringing in data from IoT devices and powering applications on top.

The reason we were spun off is because the CDP space is exploding and we’re the only enterprise-grade independent CDP on the market. Although we were spun off from ARM, we’re still owned by SoftBank, and SoftBank recognizes the CDP opportunity.

What data sources do you commonly connect?

It starts with web activity, mobile app behavior and transaction data, and most of our customers have some sort of unique data set they’re tapping into so as to try and be competitive, particularly with digital companies. For example, we have a CPG customer with 75 years’ worth of loyalty data that they’ve put into our platform.

Do you have customers that are actually using the data they collect from fridges and cars?

When you can get all of these data sources together in one place, you can bring intelligence to every interaction and step in the customer journey. For an auto company, for example, a person’s acceleration profile is a huge indicator of their preferences. And if a consumer drives aggressively and accelerates and brakes a lot, it might be time to start showing offers for a new car. Some early adopter brands are starting to do this, including our client Subaru.

Who is your typical customer, and what is the main problem they’re trying to solve?

It’s companies, both B2C and B2B, with lots of data in different places and across multiple touchpoints that want to bring this data together to generate insights and intelligence.

In terms of verticals, it’s retail, CPG – which is a category that generally wants to do more DTC manufacturing – automotive and financial services.

How long does it take to onboard a new customer?

Anywhere from a few weeks to a couple of months, but it can vary dramatically. One of our key differentiators is that we have solutions engineers and a professional services team that’s able to help customers derive value in as short a time as possible. We start with the lowest-hanging fruit, which means we’re able to get the first use cases up and running in a matter of weeks.

Low-hanging fruit, such as?

One example is the duplication of customer profiles. If a company has 20 million profiles, after unifying them we might find that 3 or 4 million are duplicates. We can immediately suppress them so that you’re not hitting the same consumer twice with the same advertising. The value of that use case is apparent very quickly.

How else do you differentiate beyond speed to value?

Through IoT data and by bringing data management and customer experience management together into one platform. Customers also can bring in data without definitions and start running queries right away.

And we’re enterprise grade. Some of our largest customers are deploying us in more than a hundred countries. We help them create a central data set which can be made available to tens or hundreds of teams in a secure and easy manner.

Who are your biggest competitors?

At this point, it’s only really the largest marketing clouds, because we focus on the enterprise and the Global 2000.

We see Adobe and Salesforce more than Oracle.