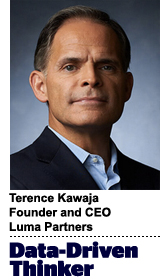 The intersection of media, marketing and technology has always been a complex and dynamic place. M&A deal activity has been persistent as the sector became digitally addressable with the application of data and software.

We are now at an inflection point. We predict that the next 18 months will see the greatest surge in M&A transactions the sector has ever seen.

There are eight factors that support my thesis:

This means that before the end of the year, we could have two dozen publicly-traded companies – all with valuations in excess of $1 billion – in the sector. If they trade at current multiples that average more than 20 times revenues, that implies that investors have high expectations for growth. While some of this growth will be achieved by organic means (see points one to four above), companies will invariably have to resort to inorganic growth (code for M&A) to satiate these growth expectations and differentiate from their competitors. That means the strategic buyer pool for ad tech businesses just got a lot bigger.

For a sector that was out of favor with investors for many years, this trend is a welcome development. Get ready for the deluge!