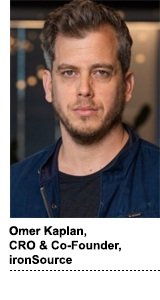 When Google announced the Android Privacy Sandbox in February – and subtly heralded the coming end of the Google ad ID – Google gave developers loads of lead time to prepare.

Google is putting out proposals over the course of this year with a beta release scheduled for sometime in Q4.

But advertising is not Apple’s main business, which was evident in its somewhat careless rollout of its AppTrackingTransparency framework last year.

When, in June 2020, Apple first teased plans to start requiring an opt-in for the IDFA starting with iOS 14.5, mobile ad tech companies were left scrounging for details in ambiguous documentation.

But these days Apple is a bit more open, says Omer Kaplan, CRO and co-founder of ironSource, which offers monetization, user acquisition and mediation solutions for app developers.

Although Apple still makes far more App Store revenue from games that monetize through in-app purchases, its services revenue is starting to grow. The health of the advertising ecosystem “is also important to them,” Kaplan says.

“Apple does understand that they need to provide all of the relevant solutions,” Kaplan says. “They are more accessible than when it started.”

Even so, it’s difficult to ever anticipate exactly what moves Apple will make, he says.

“I think Apple will take a responsible approach,” Kaplan says, “but it’s very hard to specifically predict what they will do, [and so] we focus on being prepared for all scenarios.”

Also in this episode: Being a newly public ad tech company in a tricky market, the rationale behind ironSource’s recent M&A spree and Kaplan’s new album inspired by The Beatles, Dylan (and not the Android Privacy Sandbox or the IDFA, thank you very much).

Note: The correct revenue split between Sonic, ironSource’s app business, and Aura, its OEM and carrier solution, is 88% and 12%, not 87% and 13%, as estimated in the episode.