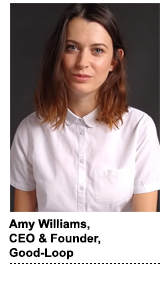 The fact that online advertising has a carbon footprint is starting to take hold in the public consciousness.

GroupM, Publicis and PHD, for example, have all signed a pledge to achieve net zero carbon costs in their advertising supply paths by 2030, and ad tech startups are cropping up and releasing products to help track and offset the environmental impact of the digital advertising supply chain.

More broadly, the number of companies reporting on their ESG commitments (that’s environmental, social and governance-related issues) has tripled over the past 12 months, which is a good indication that investor money will flow to organizations “that take this stuff seriously,” says Amy Williams, CEO and founder of watch-to-donate sustainable advertising startup Good-Loop, on this week’s episode of AdExchanger Talks.

It’s an ongoing journey, though.

But the environmental impact isn’t ephemeral. There is evidence that the internet as a whole has a larger carbon footprint than the entire airline industry (!!), and programmatic advertising is a contributor.

“With all of the computational power that goes into header bidding, exchanges, SSPs, DSPs and multiple bid requests,” Williams says, “there is a huge amount of electricity that’s used to run our current advertising system.”

But, at the same time, she says, “the extent to which people are aware of that and open to a conversion is changing at a phenomenally fast rate.”

Also in this episode: On why we might need an EPA for RTB, the dangers of greenwashing, why – and how – it’s possible for online advertising to be carbon neutral even today and … ostrich riding in South Africa.