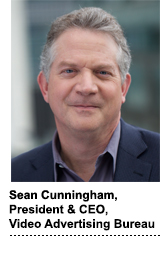 Nielsen didn’t have a contingency plan for being unable to service its panel during the pandemic. In some ways, that’s understandable. Most companies weren’t ready for COVID-19.

The problem was how Nielsen acted after its undercounting came to light, says Sean Cunningham, president and CEO of the Video Advertising Bureau (VAB), a trade organization that represents TV networks and the advertising firms that serve them.

In some ways, the fallout was less about the crime and more about the “cover-up,” Cunningham says on this week’s episode of AdExchanger Talks.

Last year, the VAB released a review of Nielsen’s reporting, which claimed Nielsen had undercounted TV viewership for the month of February 2021 – smack dab in the middle of the pandemic – by up to 6%.

“We came out with airtight proof that the panel was broken,” Cunningham says, noting that, although Nielsen’s panel membership had been shrinking for some time without being replaced, Nielsen didn’t disclose that information to broadcasters and advertisers without the extra push.

“Taking COVID as a blanket excuse to suspend the typical rules of how you do business and the rules of disclosure – that was a major mistake,” he says.

From the outside, it might look like there’s bad blood between Nielsen and the VAB, but that’s not the case, Cunningham says.

“This isn’t personal,” he says. “I don’t know that anyone’s rooting harder than we are for [Nielsen] to get it right.”

Also in this episode: Upfront-related predictions, the rapid rise of alternative measurement providers, why CTV measurement is still so messed up and how Cunningham spends most of his weekends (which involves an unlikely combination of ice hockey and musical theater).