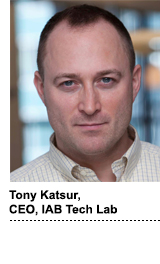 It’s been more than two years since the IAB Tech Lab first announced Project Rearc, an industry effort with the rather lofty goal of rearchitecting how personalized advertising functions online.

Google keeps kicking the can down the road, but third-party cookies are scheduled to be phased out in Chrome starting next year – and the industry is scrambling to develop viable alternatives.

But what progress has been made since Rearc first kicked off in February 2020?

“The flywheel is really starting to spin up in terms of Project Rearc initiatives hitting the market,” Katsur says, pointing to the recently released seller-defined audiences spec, the soon-to-be-released Global Privacy Platform and the Global Accountability Platform, which is in the works and set for release later this year.

The question is: Why do these things take so long? There are a couple of reasons, says Katsur, who joined the Tech Lab as chief last summer.

First, Google’s deadline extension for the deprecation of third-party cookies until the end of 2023 took away some of the urgency to change. There’s also the fact that the industry is dealing with multiple existential crises at the same time – from platform changes to privacy regulations – and rebuilding the foundation of online advertising takes time, apparently.

But the momentum is starting to regather, and there’s growing participation among members of the Tech Lab’s privacy-oriented working groups and committees to “get these solutions out the door,” Katsur says.

“We are hell-bent on moving faster … [but] standards have wide-ranging impacts on a multibillion-dollar industry, so we do need to be deliberate,” he says. “It doesn’t mean moving faster just to move faster.”

Also in this episode: Hope springs eternal for the Transparency and Consent Framework in Europe (the Belgians seem open to collaboration), an update on PETs (aka, privacy-enhancing technologies) and fighting in white-collar fight clubs (no, we don’t mean IAB Tech Lab board meetings).