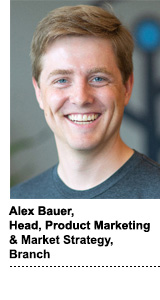 Mark Twain once said (but not exactly): “Reports of my death have been greatly exaggerated.”

A similar sentiment can be applied to mobile measurement partners (MMPs) following Apple’s rollout of its AppTrackingTransparency framework last year.

It was hard to imagine how MMPs could survive losing access to the device-level data that allows them to attribute app installs. Sure, the IDFA could still be used for ad tracking and measurement with permission, but only a subset of people would actually opt in to that.

How … is this happening?

The answer, says Alex Bauer, head of product marketing and market strategy at Branch, is simple: evolution and innovation. Branch, for example, rebuilt all of its data integrations that depended on IDFAs and supports SKAdNetwork-based attribution.

“The MMP space is not dead, but the process of delivering the results, the measurement, the measurement product – that is becoming more commoditized,” Bauer says on this week’s episode of AdExchanger Talks.

In other words, rather than causing the demise of MMPs, Apple’s changes triggered a wave of innovation out of necessity among marketers and their partners.

“I don’t think any app marketer is planning to give up,” Bauer says. “As a result of these changes, they’re just getting more innovative about how they do the marketing for their apps. It’s not only paid advertising anymore.”

Also in this episode: What’s up with the China Advertising ID, the difference between fingerprinting and probabilistic attribution, a deep dive on the Android Privacy Sandbox and what it’s like to grow up in a log cabin.