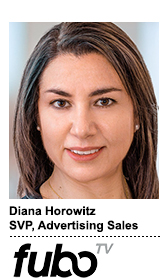 Streaming TV adoption has accelerated to the point where a large majority of US households contain a connected TV device, and nearly as many (78%, per Leichtman Research) subscribe to at least one streaming service. But marketers are still waiting for the other shoe to drop, in the form of truly converged sales from the largest media companies.

“We saw, in particular, some of the very large media companies really reorganize themselves around streaming,” Diana Horowitz, SVP, advertising sales at FuboTV, says this week on the AdExchanger Talks podcast. “Once you see that, you can say that we’re in a new era.”

FuboTV is a sports-led live TV streaming service that offers 100-plus live TV channels, along with on-demand titles. Horowitz joined in June 2020 as the company’s first SVP in charge of advertising. Her team of four has since grown to 10, including a yield manager charged with juggling demand across many partners. Advertising’s contribution to FuboTV’s overall revenue has grown from 8% in 2019 to 11% in 2020.

Horowitz talks about the jigsaw puzzle of TV inventory and how FuboTV aims to capitalize on the complexity.

“We have a large and robust programmatic business, [and] we’ve been leaders in that space, working with all the top SSPs, DSP [and] resellers,” she says. “That’s an area we’re focused on evangelizing in market, [because] in some cases people think of [programmatic] as being less premium advertising, but that’s not the case.”