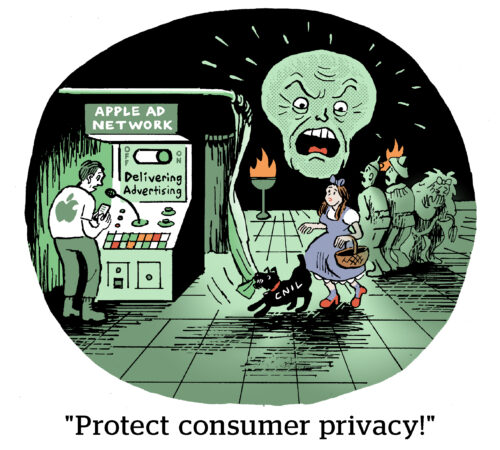 In Europe, four carriers – ​​T-Mobile, Orange, Vodafone and Telefónica – are pressing the European Commission to block Private Relay, alleging it will “impair others to innovate and compete in downstream digital markets,” The Telegraph reports.

With its growing multibillion-dollar services business, Apple is increasingly more competitive with carriers for mobile ad dollars, app installs and payment services – the list goes on.

Apple doesn’t track Safari traffic to target web ads anyways. But tracking customer web traffic and location is an important ingredient for many of the services a mobile carrier provides.

The EU is unlikely to step in to stop Apple’s Private Relay, although there are other things carriers can do. T-Mobile, for instance, disabled iCloud Private Relay on its US network, 9to5Mac reports.

But although T-Mobile can flip that switch, Apple gets the last laugh, since it owns the interface.

Now an error message in the Apple Settings section for US T-Mobile and Sprint iOS 15 users reads: “Your cellular plan doesn’t support iCloud Private Relay. With Private Relay turned off, this network can monitor your internet activity, and your IP address is not hidden from known trackers or websites.” Oof.

If your company deploys a consent management platform with a set-it-and-forget-it approach … you’re asking for trouble.

“Long story short, it’s a very different thing to get compliant the first time than it is to maintain compliance over time,” Romain Gauthier, CEO of French CMP Didomi, tells AdExchanger.

The deal price wasn’t disclosed, but Gauthier says it fell into the “low seven figures.”

Publishers and marketers use privacy tech to detect compliance gaps and stay on top of vendors that use their data. For example, when Agnostik sees a privacy flag with a customer’s website, like a vendor dropping a cookie or collecting data it shouldn’t, it sends an automated email alert with instructions to address the issue.

Gauthier predicts that the ability to run automatic and ongoing privacy audits will be a core marketer need, right up there alongside brand safety.

Consent data – requesting it, collecting it and managing it – was one of the main themes in advertising last year, and that isn’t going to change in 2022 and beyond. [Related in AdExchanger: “Why 2021 Was The Year Of Consent For Digital Media.”]

MediaMath co-founder Joe Zawadzki is stepping down after a 15-year stint as CEO, Business Insider reports. Zawadzki will stay on as an advisor, and will be replaced as chief exec by board member Neil Nguyen, the former CEO of Sizmek.

Zawadzki has placed more programmatic bets than anyone. He’s a general partner at the digital marketing investment fund AperiamVentures and has made scores of private angel investments.

And yet, MediaMath got caught in a VC funding trap. It raised almost half a billion dollars, including one round to offload disenchanted investors, which means that if it were to sell, it would come along with a significant price tag.

MediaMath also didn’t have the numbers to IPO, and the M&A wave that consolidated its smaller rivals passed it by. (Why pay the MediaMath premium if all you need is DSP tech and some engineers?)

Get In The Zone

Roku rolled out its new “Live TV Zone” on Tuesday, which leads users straight to its hub of live television networks, TechCrunch reported.

Roku launched the live TV channel guide in 2020, but now it has a permanent home in Roku’s navigation menu. It also has more than 200 live channels, doubling the original slate.

Infinite consumer choice and finite bank accounts mean programmers are easing up on subscription-only strategies and are looking for free viewers elsewhere. Not that Roku is the first to realize this – other free streamers like ViacomCBS-owned Pluto TV and Comcast’s XUMO were early entrants.

The increasingly blurred lines between traditional and streaming TV lie in ad-supported content – and a lot of it.

Roku already realized it was making a lot more money on its platforms than through device sales. Last quarter, its platform revenue was up 82% year-over-year to $582 million, while device revenue dropped 26% to $97.4 million.

Live TV is an elixir for Roku’s overall inventory pool, since it’s true TV-quality content as opposed to long-tail CTV apps with questionable video inventory that just happens to be viewed on that big screen on the wall.

The activist who got advertisers to dump Breitbart is coming for other extremist sites. [Protocol]

Google makes its last-ditch lobbying effort to influence the EU’s Digital Markets Act before it’s put to a vote. [FT]

Apple is in serious talks with the MLB to broadcast baseball games next year. [NY Post]