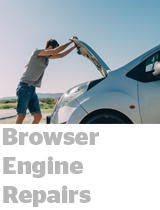 Does the web need more browser engines? The recent trend has been toward browser engine consolidation. Google helped this along by growing Chrome’s market share, but Microsoft gave up on its own web-rendering software and moved to Chromium at the end of 2018. Chromium is open source – so the underlying tech is visible to everyone and any developer is free to build on the platform. That’s an important differentiation from Internet Explorer, the old Microsoft browser engine that held dominant share through the mid-aughts, a period when web innovation “effectively halted” because Explorer was closed-source software, writes Daniel Appelquist, Samsung’s director of web advocacy. But Chromium isn’t exactly “open,” even though it is open source and companies such as Microsoft and Samsung are contributors. The platform’s governance is still controlled by Google Chrome developers and other Google employees. Without competitive browser engines, Chromium won’t need to implement changes. Developers may argue from “a moral high ground” when it comes to new Chromium APIs and standards, but what forces those suggestions into live code is alternate browsers implementations, according to Appelquist. More.

Consent, data privacy and measurement are a convoluted mess right now for digital advertising companies. One example is Jumpshot, the analytics subsidiary of the cybersecurity company Avast, which has been using the Avast user base and its visibility into online behavior to package data for advertisers, according to a report by Vice and PCMag. The data is anonymized, and Avast has an opt-in message saying it shares data with Jumpshot. Avast has a big advantage since a security service has a legit reason for data collection, compared to audience targeting companies that must gain explicit consent – an idea referred to as “legitimate interest” under GDPR. But Avast users likely don’t know how their data is used for marketing measurement, or that the data is used at all. More. Avast has also partially divested itself of Jumpshot. Ascential, which owns the Cannes Lions festival and MediaLink, picked up a 35% stake in Jumpshot last July, valuing the subsidiary at $173 million. Ascential has an option to buy another 16% next year, and would take over as majority shareholder.

State attorneys general and the Department of Justice are meeting next week to share information about their respective probes into Google, a sign they could combine their investigations, The Wall Street Journal reports. The two government bodies have been investigating Google separately and haven’t shared any information thus far. At least seven state AGs have been invited to the meeting, led by Texas’ Ken Paxton, where they are expected to discuss Google’s dominance in digital advertising and anticompetitive behavior related to Android. The two groups will also talk about the scope of their probes and the division of labor between them moving forward. Despite state and federal collaboration, however, some worry the Google investigation will split along political lines, as Democratic AGs have continually clashed with the Trump administration on the regulatory implications of mega-mergers like the Sprint and T-Mobile tie-up. More.