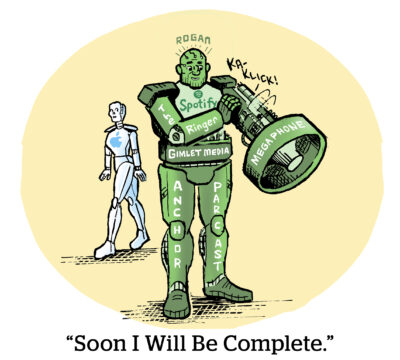 Podcasting has consolidated dramatically, perhaps even unhealthily, in recent years.

Roughly one year ago, the audio market research firm Edison Research conducted a test to see how many podcast networks an advertiser would need to buy from to cover 50% of the universe of weekly podcast listeners. It took seven networks – which, at that time, was greeted as a concerning sign of consolidation, writes Edison Research SVP Tom Webster in a blog post.

Running the same test now, an advertiser can cover 50% of podcast listeners with only four networks.

In almost three years of Edison’s tracking, podcast listenership has grown slightly, but mostly it’s a long plateau. The big platforms that have consolidated podcast content into proprietary offerings ramp up revenue by improving ad targeting and analytics capabilities.

In February, for instance, Spotify acquired Podsights and Chartable, two podcast analytics services. And, just this week, Apple finally started reporting follower counts to podcast publishers, suggesting they use the data to ask followers to subscribe.

“But, if these significant players in the space don’t also devote some resources to growing the medium itself – to tending the garden that we all share,” Webster writes, “the garden is not going to grow.”

YouTube has a new plan for competing with the streaming platforms: ad-supported video on demand.

Wait a minute, hasn’t YouTube been doing AVOD since forever?

The answer is yes. But now YouTube’s AVOD library in the US will include 4,000 TV episodes from shows like “Hell’s Kitchen” and “Unsolved Mysteries,” as well as 1,500 movies, The Drum reports.

YouTube wants more content it can safely guarantee to brand-suitability-conscious advertisers. Average daily time spent on the app is also a critical metric, as platforms such as YouTube and Meta try to secure their share of online attention from the upstart TikTok.

Does this spell the demise of YouTube Premium, the subscription-based offering? There’s no official word yet. But this is another example of a video platform that tested subscription offerings before returning to tried-and-true advertising revenue.

Instagram announced this week it will allow all users in the US to tag products in their posts. The capability had been available for years to influencers and partnering merchants.

General users can’t earn affiliate-style commissions on sales – yet. But that’s in testing with select creators, The Verge reports.

Adding product tags might sound a little banal as far as product announcements go, but unleashing a full-on affiliate network across Instagram users would make Instagram a far bigger player in ecommerce. (Meta is reeling – no pun intended – partly because ecommerce sellers can no longer connect ads on the platform to sales.)

To take one example, Adidas announced on Wednesday it will create a network of 50,000 college student athletes who will be paid for social media posts and the sales they drive. For now, those athletes need to monetize sponsorships through account-linking services such as Linktree or Linkpop, which Shopify also happened to launch for social commerce this week. Eventually, however, Instagram could make any link or tag a potential commission.

Imagine this: What if an Adidas NCAA marketing program could be the biggest affiliate network in the world, just like that? (h/t David Herrmann aka @herrmanndigital)

The Electronic Frontier Foundation is calling for a ban on behavioral advertising. [Check out the release and a worthwhile Twitter thread on the EFF’s argument, courtesy of Twitter King Ari Paparo aka @aripap.]

There’s no global shopping mall: Unlike so many of our online experiences, shopping is one area that has remained mostly local. [NYT]

Rather than an ad network, Netflix should let 1,000 apps bloom on its platform. [Bloomberg]

Why Merrell footwear is dedicating half of its ad spend to digital video. [Digiday]