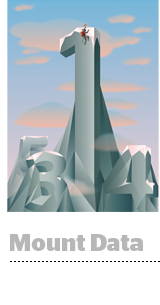 Every publisher wants to harness its data – but you can’t climb a mountain without a lot of pain.

At the Google Publisher Leadership Summit in Chicago, ad execs from The New York Times, Vice Media and the Local Media Consortium (LMC) discussed their often-arduous quests to reach the peak.

The New York Times, for example, was afflicted with data silos. Although it had a lot of data expertise in-house, until recently that know-how was decentralized.

“We had analysts embedded in each of our groups,” said Laura Evans, SVP of data and insight at the Times. “We had a great environment for advertising or for content and news behavior or for consumer revenue.”

But ads, content, customer behavior and revenue are all connected – and the Times couldn’t see the bigger picture, or how what happened in one department affected another.

Meanwhile, Vice needed to glue two pieces together: getting insights and taking action.

“Vice was good at driving insights,” said Andrew Smith, SVP of ad products and solutions. “We were good at brush strokes and having directional conversations with clients.”

But understanding what to do about those insights? That was a completely different story.

At the same time, not every publisher has the resources readily available to a larger player like the Times or Vice. Rusty Coats, CEO of the LMC, advises 1,700 local media properties across 75 media companies with just that problem.

The New York Times developed a “center-of-excellence approach.” What that buzzword means is that while the Gray Lady still allocated its analysts to different departments, they all reported to a centralized hub.

“It’s a three-two model,” Evans said. “Three days with your partner, two days with your centralized group. That has helped a lot with our talent development.”

It was important for the Times to have a consolidated view of its data.

“Your customers [are] talking to you and giving you a tremendous amount of insight,” Evans said. “Your approach should be to capture everything about that customer experience in one place so you can understand what they’re saying.”

Vice had a tech stack of about 20 systems across global offices, meaning it had to work around different data laws. Integrations and interoperability became paramount considerations for Vice’s ad ops team.

Vice put all its log data into a single database (and yes, it was BigQuery).

“[The data] becomes even more valuable when we have those interconnected systems serving into the same data set,” Smith said.

Bringing disparate systems into a single database allowed Vice to figure out what actions to take based on its audience insights. For instance, Vice can now better monetize content performance.

But Vice’s scramble up Mount Data wasn’t as arduous as one might suspect, Smith said.

“But it’s very step-by-step,” he said. “You can’t do it all at once. Don’t get fooled by people who say they can do an all-in-one solution.”

Finally, the LMC’s Coats had to bring realistic strategies to local publishers. Data initiatives that work for big media companies like Vice and the Times stretch the resources of smaller pubs to the breaking point.

“Sites like Vice are much better at harvesting people right off the bat,” Coats said, while smaller publishers get better and much more manageable insights by focusing on their newsletter strategy.

“With [data management platforms], we went down a rabbit hole,” Coats said. “It was too much for our members. It was way expensive and the use case was limited [for smaller companies]. So use caution. Some of these solutions are more expensive than what you’ll get in ROI.”