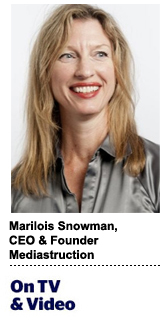 Today’s column is by Marilois Snowman, CEO and founder of Mediastruction.

After this exclusive first look for subscribers, the piece will be published in full on AdExchanger.com on Tuesday.

Not too many years ago, media plans centered on reach and frequency metrics. “How many consumers are we reaching and with what frequency?” was a north-star question. It was a barometer of campaign effectiveness.

Media industry influencers wrote books about the impact of reach and the importance of reach over frequency. Even today, as media agencies share strategies to combine live/linear with streaming, the discussion often centers on “incremental reach.”

But here’s the thing. Just about any reach calculation you see is an illusion. Because, really, with the state of consumer consumption today – when they want content, where they want it and how they want it across walled gardens and proliferating platforms – reach is elusive.

The problem with measuring reach

Let’s examine traditional, spot-market reach. Fun fact: There is no industry agreement on a reach algorithm. The number of consumers reached in a live/linear TV campaign will differ among media-buying platforms. It will even slightly differ on the same platform between the buy and sell side. Of course, the differences are usually within tenths of a point. Nevertheless, it is a cracked window.

Now, when it comes to cross-channel reach, that isn’t easy, either. Most tools, including Nielsen, use a random duplication formula that combines the reach of each media channel, then assumes some of the audience is randomly duplicated from channel to channel. That is to say, some of the eyes purchased on the live/linear TV campaign are also some of the same eyes purchased on streaming video or the corresponding billboard campaign.

But the challenge is that the reach methodology of live/linear TV (traditionally a panel-based audience representative of the TV-viewing universe) isn’t the same methodology for streaming TV (the number of households served streaming content, without sense of who is actually viewing). And it isn’t the same methodology for billboards, either (average traffic count, with some factor for visibility). So, combining the reach metrics of live/linear with streaming, outdoor or any other channel is a lot of apples and oranges comparisons.

Add to the discussion the idea that reach against demographic audience segments is a bit outdated since everything is digital these days. And anything digital can be uber targeted.

It’s time to rethink our media plan north star. What if our new reach goals weren’t just against demographics or behavioral audience segments, but were instead measured against attention?

Attention research is primarily focused on creative, but media should share in the discussion. While reach is a metric against how many households were exposed to ads, attention is a metric against a psychological response. And that is much more valuable.

Attention metrics require using panel audiences in a new way. Rather than a proxy for exposure, let’s record the panel members’ attention and measure “attention reach.”

Here’s how it would work:

Since reach is a mathematical smoke and mirrors, why waste a good crisis? Moving to attention will create a smarter, more effective starting point for media mix, which can be calibrated with modeling based on performance. It will better tie creative and media. And it will be more respectful of the consumer experience, which should ultimately be our north star.