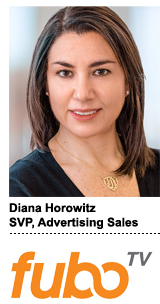 “That in itself speaks to the importance that we’re putting on the ad sales piece,” said Diana Horowitz, the Scripps and Comcast vet now filling that newly created role at Fubo.

Fubo, which reported its first earnings in early November, has a lineup of more than 100 TV channels that’s heavy on live sports content, but it’s also been expanding into new content areas, including entertainment and news, and producing its own original programming.

Although subscriptions are still what generates the bulk of Fubo’s revenue – paid subs rose 58% year over year to 455,000 in Q3, while the average revenue per user increased 14% to $67.70 – advertising is a growing priority.

Fubo first introduced addressable advertising in 2017. The following year, the company started building out its ads team, “and now we’re 100% focused on it,” Horowitz said.

In the third quarter, Fubo’s subscription revenue increased 64% YoY to $53.4 million. Advertising revenue in Q3 was $7.5 million, a 153% uptick compared to the same quarter last year.

But diversification is the name of the game. During its earnings call, FuboTV announced its intention to expand into the sports wagering market as a complementary new revenue stream for its business.

AdExchanger: What role does advertising play in Fubo’s monetization strategy?

DIANA HOROWITZ: Advertising is a major part of the strategy and a pillar of our growth. Our ad sales strategy is directly connected to the overall strategy of the company.

We’re a premium cable replacement product with a sport-first focus, but we also have news and entertainment content for the whole household. We bring advertisers a full TV viewing experience, with 90% of people watching this content live and on a CTV device. That means they’re watching ads on a big screen in a live, immersive environment where we can provide all of the targeting capabilities we have at our disposal as a CTV platform.

What kind of targeting is available?

We target through a combination of context, first-party data and third-party data through partnerships with Acxiom and others. We can provide advertisers with different network clusters based on the network’s profile – for example, sports, culture, Spanish language, entertainment, kids, etcetera – or we can create custom clusters. For Q4, we have what we’re calling a holiday bundle that targets all of the channels that run content from Hallmark, Food Network and the like.

We’ll work with any DSP – The Trade Desk is a big partner of ours – and from an SSP perspective, we work with SpotX, Magnite and others. We also work with some local resellers, like Gamut, Premion and Amazon. It’s really quite a range, because we want to provide the most optimal experience for advertisers and the most efficient and easy to access our inventory.

How much air time do you give advertisers?

As a vMVPD, the ad inventory we sell is two- to three-minute partner avails within all of the different content providers we carry and it’s dynamic ad insertion into those avails. That includes selling national campaigns.

Are your subscribers mainly cord cutters, cord nevers or people who add FuboTV on top of an existing cable package?

Based on the surveys we’ve done with our subscribers, the vast majority – 90% – are cord cutters, as in viewers that previously had satellite or cable TV, but currently do not.

In terms of the advertising opportunity, it really is an incremental, unduplicated audience for the advertisers running campaigns with us.

Have you built any technology in house?

Ad sales and ad ops both roll up to me. We use partners for much of what we do – FreeWheel is our ad server, for example – but our CTO has also built out some additional targeting capabilities and we have strong technology around content recommendations to make sure we’re serving relevant content to our viewers. It’s a combination of homegrown and trying to work with the best-in-class partners in the market.

Speaking of partners, what do you think of the Unified ID 2.0 effort?

The Trade Desk came to us with this project, and we will be a participant, although it’s a little early to say exactly how we’ll participate just yet. We’re a big supporter of anything that spreads the word about the value of CTV while also elevating our offering.

Under my watch, for example, we participated in the NewFronts for the first time this year. We’re also a member of the IAB, we work with multiple partners on industry initiatives, including Telaria and SpotX and we joined FreeWheel’s Council for Premium Video.

We partner as much as we can across the industry.