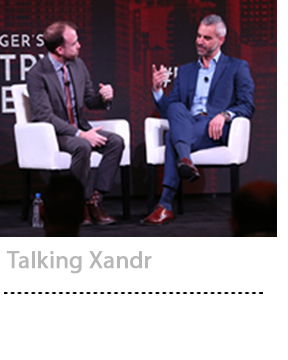 When AT&T bought Time Warner in June to create a programmatic exchange for the TV industry, many looked to Verizon’s purchases of AOL and Yahoo as a comparison.

But the two telco’s strategies “could not be any more different,” said Xandr CEO Brian Lesser on stage at AdExchanger’s Industry Preview last Thursday.

There are, however, similarities. Both companies launched standalone units – Oath under Verizon and Xandr under AT&T – with the promise to use telco and set-top box subscriber data to make advertising more relevant across a portfolio of content.

“The vision was always, how do we take advantage of data, distribution, content and technology to build a better advertising business?” Lesser said.

That vision didn’t quite pan out for Verizon, which took a $4.6 billion write-down on Oath due to underperformance. After Verizon CEO Lowell McAdam departed in June, followed by Oath CEO Tim Armstrong in September, it became clear that the business unit didn’t have executive support to fulfill its promise.

AT&T, on the other hand, has buy-in from CEO Randall Stephenson and has already begun using data from its footprint of 170 million mobile and broadband subscribers to sell digital and addressable TV ads through Turner. Over the past year, the company has pulled together customer files, TV viewership data and mobile browsing and geolocation data into one system, matched against identity, Lesser said.

“We are the biggest sellers of addressable television in the world right now, and that business is growing orders of magnitude faster than TV advertising broadly defined,” he said.

AT&T’s vision also differs in how it plans to scale. While Xandr plans to divert AppNexus product and engineering talent, which it acquired for $1 billion in June, into building a TV and video marketplace, it won’t do so at the expense of the display business.

“Once we understand an advertiser’s audience, we want to sell them every touch point across multiple channels,” Lesser said.

Similar to how Verizon used Yahoo and AOL ad tech, AT&T wants to create an open marketplace where buyers can use subscriber data via AppNexus’ DSP to buy across third-party inventory, not just its O&O. But that inventory will be focused primarily on TV and video.

“It’s not a walled garden,” Lesser said. “It’s a DSP to access inventory across multiple parties and our data will be resident in that DSP.”

While Xandr and AT&T have an impressive set of assets to make that vision a reality, Lesser hinted there could be another acquisition down the road to bolster its capabilities.

“We’re not done in terms of what we acquire and invest in, but I’m very careful about that,” he said. “I’m very specific in terms of what I’m looking for. That’s anybody that can help with our vision, but also scaled companies that we’re not going to break in the process.”

Correction: This story previously said Verizon does not use Oath ad tech to monetize outside of its O&O. Verizon Media operates a third-party exchange.