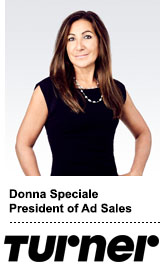 Why is the industry still talking about linear vs. digital when to consumers, it’s all just content?

That’s the question Donna Speciale, president of ad sales at Turner, is asking to galvanize long-awaited changes to how network TV transacts media.

“At some point, we’re not going to say linear or digital,” she told AdExchanger. “We’ll just be one holistic company. There’s not going to be this bifurcation.”

The industry has long awaited better targeting and measurement for linear TV, and now with Turner parent WarnerMedia operating under AT&T, the technology and data is there to do it. Corralling stakeholders toward a new way of transacting in an entrenched business is the challenge, Speciale said.

“The issue is there are so many constituents tied to this,” she said. “Trying to get everybody aligned is going to be our biggest struggle.”

But Speciale has a track record of creating unlikely partnerships. In 2017, she led Turner to join Fox and Viacom in launching OpenAP, a measurement standard that allows advertisers to consistently target and measure audiences across each network’s portfolio. In April, NBCUniversal joined the consortium to cover half of TV’s total footprint.

Now, Speciale wants to get the creative community involved to adapt advertising messages to new transaction and targeting models.

“Creating something for the Super Bowl is very different than creating addressable, household messaging,” she said.

AdExchanger: What AT&T data is Turner currently using and on what inventory?

DONNA SPECIALE: We’re doing beta tests for better audience targeting on digital and linear. Our research guys are qualifying it and we’re adding it into our [audience buying product] Audience Now. We’re going to test attribution models and new capabilities. That’s what most of 2018 will be about.

The goal is to do a lot more audience deals using that data. The holy grail will be to provide business outcomes and attribution models. In the latter part of 2019, that could be very, very real.

But TV is broad reach. You don’t want to be too targeted, because you don’t want to lose that value. That doesn’t mean you can’t get a lot more efficient. Our targets are too broad right now. There aren’t 18- and 45-year-olds with the same purchasing habits. So there’s a fine line with linear to keep the relevancy of reach but hone in on a much more targeted audience.

AT&T CEO Randall Stephenson said Turner inventory will be available on AppNexus in 12-18 months. What will that look like?

It’s going to be our digital inventory. That’s what Brian [Lesser, CEO of Xandr] is working on. He’s utilizing AppNexus to build the linear platform over the next two years. We’ll start putting our inventory on there where it makes sense. We’ll be the people they test it with.

But we have to play in a lot of different areas. I think [AppNexus] will be one of many we have our inventory on. From a business perspective, we have to get the best of everything.

How are marketers responding to buying your inventory this way?

It’s slow, but they’re embracing it. [Agencies are] very happy with OpenAP. They’re giving us guidance on the road map. We’ve worked with every major agency and each has renewed and added more clients. The clients who have renewed have given us bigger budgets.

But it’s very resource-heavy. It’s a different skill set, so we’re educating the agencies. It’s a lot of work on our part. It’s not that they’re resistant. It’s more about resource availability.

How will your goal to sell on audiences affect the upfront process?

I don’t see the upfront going away. It’ll evolve. We get confirmation of audience deals in the upfront. It’s just a different way of talking about it.

With audiences, we know what the year looks like, and as we get closer to the quarter, it gets laid out. But we have a commitment in the upfront, and it’s just like scatter; as we go through the year, more comes in. It just doesn’t get locked in until closer to the quarter.

How will your sales force need to change to reflect this new market?

We’ve been evolving the sales force. We’ve restructured twice already. That doesn’t mean we won’t do it again. We have to keep iterating.

It’s not just the sales organization that’s changing. We’ve had to bring in data scientists that are going to mine the data we’re getting from AT&T. We’re building another content studio with creative directors, which a media company never had to do. And we’ve added a lot of talent in digital and social. As people leave, we replace with a different skill set that know both [linear and digital].

Stephenson said AT&T will likely pull resources from Turner and put them toward HBO. What does that mean for Turner?

John Stankey [WarnerMedia CEO] has been open with us that they bought us because of our content on Warner Bros., HBO and Turner. We are a premium video company. He believes that’s our future.

[WarnerMedia is] becoming a much more holistic company. We have separate P&Ls, but collaboratively we’re together. You’ll see a lot more content living in different outlets across WarnerMedia, like the Tiger [Woods] and Phil Mickelson golf tournament on Thanksgiving. That’s going to be on Bleacher Report Live, HBO Now and TNT. We didn’t do a lot of that prior to AT&T. So resources are not going to be taken away, just utilized more collaboratively.

AT&T is aware it’s losing customers in the mass migration to OTT. What’s your OTT strategy?

We have to live in all the different worlds. Advertising is not going away, it’s just going to be in a different form. We’ve been reducing commercials. There are models where there might not be advertising. But we’re going to be a company that’s living in all spaces. We have to be.

It needs to shrink and be a lot more targeted. That’s where our data is going to come in.

Are they disconnected? What’s the challenge there?

We’re trying to be much more collaborative. It’s not like we want to produce for them, even though we have clients asking us to because we’re so close to our content. But it’s not enough. We’re changing our model and skill sets. The creative agencies also have to change theirs. I don’t know if they’re thinking that way.