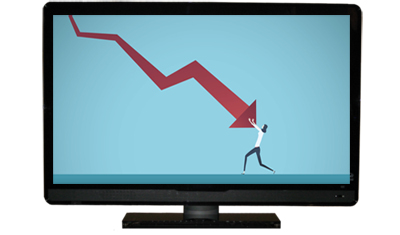 This ain’t no papercut.

And the picture doesn’t get much rosier for broadcast TV.

By 2024, more than one-third of all US households will have canceled their pay TV subscriptions, and fewer than half will still be shelling out for a cable package.

“It’s an acceleration of an existing trend,” Eric Haggstrom, a forecasting analyst at eMarketer, which is now a part of Insider Intelligence.

The more obvious trends driving this decline are pandemic-induced increases in streaming consumption combined with access to exclusive streaming content, cable package price sensitivity and the loss of live sports during the first half of the year.

But there’s more to the story, Haggstrom said.

“A lot of pay TV losses are also due to some of the individual choices being made by the pay TV providers themselves,” he said. “Satellite and cable companies have started to raise prices and prioritize profitable subscribers who are paying full price.”

It’s actually good for a cable company’s bottom line, if not for their short-term revenue, when unprofitable customers with discounted TV/internet bundles cut their TV plans but keep their higher-margin internet service.

Even so, the ground is shifting underfoot for pay TV providers. Every large TV broadcaster is investing big into streaming, and ad dollars are starting to follow viewers out the door.

Traditional TV ad spending will drop by 15% this year to $60 billion, which is the lowest it’s been in nearly a decade. Although eMarketer predicts spending will rebound somewhat in 2021 on a year-over-year basis, TV ad spend will remain depressed until at least 2024 … just in time for pay TV audience erosion to be the highest it’s ever been.

Meanwhile, ad-supported video-on-demand services are positioned to clean up.

For example, despite the pandemic, Roku and Hulu both had bangup second quarters, while other media companies declined on a year-over-year basis.

“When the networks first started providing CTV and OTT services, they were largely considered an afterthought by advertisers or just something to help with audience extension,” Haggstrom said. “But now we’re really starting to see that change as time wears on.”