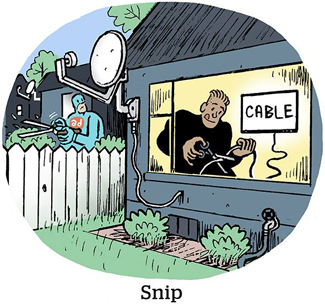 Snip, snip, whoosh. Hear that? It’s the sound of cords being cut followed by an inexorable decline in TV ad spending.

The share of TV ad spend in the United States is set to drop below 30% of total ad spending for the first time this year, according to eMarketer research released on Wednesday.

TV ad spend hit its peak in 2018 at $72.4 billion, followed by a particularly steep 3% decline this year ($70.3 billion) due to the lack of major cultural and political events. With the Olympics and the presidential election hitting next year, TV ad spend is expected to increase roughly 1% year on year, to $71 billion.

What does it all mean? The TV ad business has reached an inflection point where seasonal bumps and buoys such as elections and sporting events will no longer counteract macro declines, said eMarketer forecasting director Monica Peart.

“We’re seeing a secular shift to digital viewing, and that’s driving subscription declines in pay TV,” she said. “We’re seeing lower ratings and lower viewership on many of the major networks as compared with years past.”

Despite rating declines, TV networks have been able to mask the downward trend by charging higher prices, which made the upfront season this year look like a bonanza. But that’s not a sustainable plan.

“Right now, TV still has the greatest reach, which is why advertisers are still keen on investing, but the shift is already occurring – we do not have a pay TV forecast that shows growth,” she said.

EMarketer projects that the number of pay TV households will drop from 86.5 million this year to 82.9 million next year and 79.4 in 2021. On the flip side, cord-cutting households in the United States will jump 19% this year to 21.9 million.

“The notion that TV has a stronghold on certain audiences is being challenged,” said Peart, pointing to the raft of streaming platforms parading onto the scene, including Disney Plus, which was released on Tuesday.

Many of these new services are subscription based, which means advertisers are out of luck. So, where’s the TV ad money going to flow as eyeballs turn away from linear?

Anywhere advertisers think they can reach their audience at scale, whether that be connected TV, gaming, social media and/or ad-supported streaming services, like Hulu. “What we’re seeing here is more of a mix shift than anything else,” Peart said.

But the bottom line is that TV ad growth is in the rear view as ratings and viewership declines continue to accelerate.

“What we’re seeing is an advertiser-driven phenomenon,” Peart said. “Advertisers chase their audience wherever they happen to be spending more of their time and, increasingly, that means digital platforms rather than traditional linear TV.”