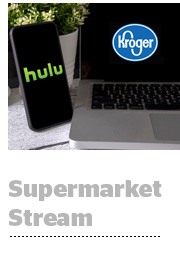 “Ratings are dwindling on traditional television, and where are those viewers going?” she said. “We saw that our buys were skewing older and older, and we knew we needed to capture more of that audience we were missing.”

Although Kroger was ostensibly hitting its target audience of adults between the ages of 25 and 54, on closer inspection it became clear that the 25- to 34-year-old set was largely missing on traditional TV.

Kroger first started flirting with over-the-top in 2011/2012 and partnered with Hulu to extend its TV reach on digital. But Kroger paused its Hulu spend for a couple of years because getting to scale was a challenge.

Now, the scale is finally there – Hulu recently hit 28 million subscribers – and Kroger has restarted the relationship, Clune said. But rather than using CTV as an extension vehicle for television, Kroger is tapping it as a source of incremental reach.

Kroger’s TV buying approach is a hybrid affair these days. Its planners use traditional television to get in front of older audiences, and OTT to reach the younger end of its target.

When advertisers run ads on both linear TV and OTT, 53% of viewers exposed to that campaign on Hulu never actually see its counterpart on regular TV, according to internal research from Hulu.

Marisa Cranswick, senior manager of media planning at Kroger, can personally attest to that phenomenon. Cranswick is a self-described “cord never,” and “I never see our ads on traditional TV,” she said.

But Kroger’s goal isn’t to replace linear TV buys with OTT just for the sake of doing so, far from it. It’s about efficiency, Cranswick said. Now that Kroger knows where to reach different segments of its audience, it can use that information to rethink its overall planning, including its daypart mix and approach to forecasting.

Most of the money Kroger spends on television is in local markets, because its store footprint is regional. But Kroger also has a line of organic products under the banner “Simple Truth” which ship nationally via Vitacost, the ecommerce company Kroger acquired in 2014.

Kroger continues to plan local media buys across specific DMAs, and to use Hulu as a brand play for national audiences. That ends up being more cost effective and actually helps justify continued spend on TV.

“We’re looking to grow and maintain our channel mix with CTV while still emphasizing the importance of TV to reach audiences,” Cranswick said. “With both CTV and TV, we can create a multiplier effect on the ROI of other channels.”

In a recent national campaign for its “Simple Truth” brands, Kroger saw 82% incremental reach on Hulu for its target demo of consumers between 25 and 54, and the majority (95%) were classified as light linear viewers, aka, those who spend little or no time consuming linear TV.

“A result like that is great, but now, how can we use it to help optimize our broadcast buys and plans to reach a younger audience,” Clune said. “It got us really thinking more about how we’re reaching older audiences and what we can do to be more efficient.”